Hallelujah To Oprah's New Drama 'Greenleaf' About A Memphis Megachurch 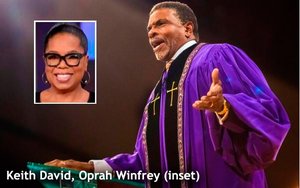 Oprah Winfrey seems to be getting the hang of this television thing.

Our prediction: She has a bright future in this business.

The basis of this bold prediction is her new scripted series called “Greenleaf,” a prime-time drama about a powerful family named Greenleaf at the head of an African-American megachurch in Memphis.

The show, produced by Lionsgate, premieres on Oprah’s cable network, OWN, over two nights this week -- Tuesday and Wednesday. She is one of three executive producers on the show (the other two are Craig Wright and Clement Virgo), and she’s in it too. She plays the owner of a Memphis nightclub who is related to the Greenleaf family by marriage (her sister is married to the Greenleaf patriarch, Bishop James Greenleaf).

Oprah (and presumably others at OWN and Discovery, which is co-owner of OWN) is so confident in this show that it was renewed for a second season back in April, a full two months before a single episode would be seen by any member of the general public. Her confidence is not misplaced: The show is a prime-time soap about a rich and powerful family that has the potential to find a wide audience.

As you might guess, the members of this Greenleaf family are harboring a number of secrets -- sins that fly in the face of the family’s public image as leaders in Memphis’ Christian community.

While the show’s cast of characters includes various relatives who work in the church hierarchy -- including wives, aunts, uncles, children both grown and not grown -- the show centers mainly on two of them, at least in the first two episodes I watched.

These would be Bishop James (played by the incomparable Keith David) and Grace Greenleaf (Merle Dandridge), a prodigal daughter who returns home to rejoin the family business after a 10-year estrangement. Her return home threatens the status of several other key family members who soon become worried about their positions in the church power structure. Among them is the bishop’s wife, Lady Mae (Lynn Whitfield).

If this show was just a run-of-the-mill prime-time soap, it might not receive a rave this enthusiastic, although whether or not a highfalutin' TV critic puts his seal of approval on it should have no bearing on its success among OWN viewers or anyone else who happens to find it.

If the show’s soapier aspects are designed to pull as many as people as possible inside its tent, it does aspire to being something a few degrees more than just a soap opera. Since the family in question is a powerful African-American one, issues of race lie just beneath the surface -- and sometimes above the surface too.

For example, the church is being investigated by the U.S. government as part of a Senate crackdown on religious institutions claiming tax-exempt status. When the bishop learns of the investigation from a Tennessee senator who is a long-time associate, he wonders if the investigation is race-related. The senator, who is also African-American, assures him that white churches are undergoing the same scrutiny.

At the same time, the Memphis community is dealing with the fatal shooting of a young man by a cop being described in the media as trigger-happy. At first glance, this seems like a ripped-from-the-headlines racial incident. But wait -- there’s more to this case than first meets the eye.

Near the end of Episode One, as I was about to dismiss “Greenleaf” as just another prime-time soap opera, Bishop Greenleaf took the church’s stage to deliver a sermon that was one of the best-written pieces of script I’ve heard on a TV show in a long time.

“The Bible is not a rule book!” he sermonized. “It’s not even a work of literature! … The Bible, praise God, is like a bunch of emails from the best friend you ever had, saying ‘I love you! I miss you! Please come home!’ ”

Recited by Keith David -- whose voice is known to many for his narration on Ken Burns documentaries such as “The War” (about World War II) and “Unforgivable Blackness: The Rise and Fall of Jack Johnson” -- the sermon makes the hairs on your neck stand up.

Nice job, Oprah Winfrey. We look forward to hearing more from you in the years to come.