A Smile For 'Ray Donovan': L.A. Fixer Is Back For Season Four 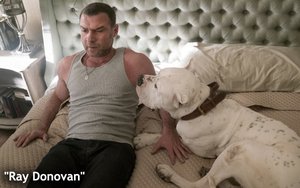 It wasn’t a broad grin and it lasted for only a few seconds, but I swear on a stack of bibles that Ray smiled in the premiere episode of the fourth season of “Ray Donovan” (starting this Sunday on Showtime). I watched the first two new episodes yesterday.

For fans of the show, Ray smiling is big news. Those who have followed Ray’s travails for three seasons might not even recognize him with a smile on his face, but they might be glad to see it.

Could their dour antihero actually be turning over a new leaf and, heaven forbid, finding happiness? Well, not so fast. While Ray’s brief smile at least provides proof that his customary scowl is not necessarily permanent, Ray has not exactly morphed into a ray of sunshine.

However, as the new season begins, he appears to be making some real effort to confront his demons, even attending a support group for adult victims of child abuse, and actually participating in the discussion.

“It’s hard for me to get close to people,” Ray admits to the group -- an understatement if there ever was one. Few characters on TV are as monosyllabic and emotionally bottled up as Ray Donovan, so it’s nice to see him dealing with it for a change.

As I have written previously about “Ray Donovan,” this show is one of the most uncomfortable dramas on TV to watch. The world of “Ray Donovan” is one where everyone is suffering and everyone is keeping secrets. No one is noble, and no one is unscathed by the deeds of others.

For three seasons, the back story of “Ray Donovan” has been the childhood abuse of Ray and at least one of his brothers by priests back in their Boston parish. In Season Four, the subject of child abuse gets pushed to the forefront even more in the story of a professional boxer who befriends Ray, and for whom Ray winds up doing some of his “fixing” work.

Believe it or not, this boxer’s child abuse history is even more heinous than Ray’s -- making for a viewing experience that is as uncomfortable as ever, if not more so.

But here’s the thing: I have found from long experience that fourth seasons are significant milestones for TV shows. Some fourth seasons reveal that a show has stuck around for more seasons that it should, that there’s really nothing left for the show to say, or its characters to do.

Other shows come to their fourth seasons with an air of well-oiled self-assurance. By this point, the actors have fully developed the characters they are playing, and the audience is fully invested in them too. “Ray Donovan” fits into this category. Every aspect of this series seems to be clicking on all cylinders this season, at least as far as the first two episodes are concerned.

As the title character, Liev Schreiber reveals himself -- again -- to be among TV’s leading actors. But he gets top-drawer support on this show too from Jon Voight, who once again gives an uncanny performance as Ray’s career criminal father, Mickey; Paula Malcomson, as his Boston-bred wife, Abby, who has a way with the f-word that rivals Joe Pesci; Eddie Marsan as Ray’s Parkinson’s-afflicted brother, Terry; Dash Mihok as Ray’s other brother, Bunchy; and just about everybody else in this show’s cast.

As for Ray finding happiness, the season premiere provides a ray of hope. But this outcome soon comes up against the realities of the sordid world in which Ray plies his trade, presenting a challenge to him in his quest to exorcise his demons. Will Ray Donovan find happiness, or will he succumb to the requirements of his job and backslide?

This show makes you want to stick around to find out -- for a fourth season and possibly more. Welcome back, Ray.