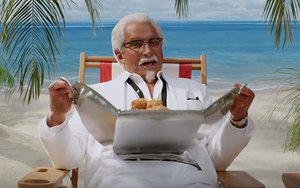 Who better to represent KFC’s Extra Crispy Chicken than an actor whose signature is being perennially tan?

While the yung ’uns may not know Hamilton’s backstory, they can’t miss his bronzed epidermis — and older folks are bound to smile at his willingness to play against his super-suave image for laughs. (The svelte actor has even been clad in a too-tight white jacket, to simulate a slight paunch.)

Indeed, in the campaign’s announcement, he’s quoted as saying: “It didn’t take long for me to get into character as the Extra Crispy Colonel. One could argue that my entire career has been leading up to this role."

Tying into the summer season, all of the ads (viewable on KFC’s YouTube channel) have a beach setting. Hamilton interacts with families (below), uses a tray of chicken as a tanning reflector, and pronounces that Extra Crispy “isn’t just a product, it’s a lifestyle” — all the while promoting KFC’s $5 and $20 Fill Ups as perfect for summer meals and gatherings.

According to the brand, more than half of Americans aren’t aware that KFC offers the Extra Crispy recipe, as well as the Original Recipe.
KFC has garnered lots of attention over the past year for featuring different actors and comedians as the Colonel, including Darrell Hammond, Norm Macdonald and most recently Jim Gaffigan – who will continue to be seen in other ads.

"Just as no one person could play the Colonel, no one Colonel can sell both Original Recipe and Extra Crispy fried chicken," Kevin Hochman, KFC’s U.S. CMO, said in a statement. “And no actor was more qualified to play our Extra Crispy Colonel than a very tan George Hamilton."