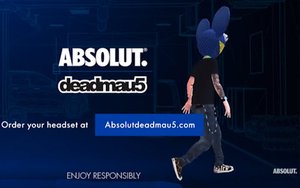 Absolut has created a virtual reality game in partnership with the electronic music producer and DJ Deadmau5.

The game app is free, but the brand is also experimenting with trying to generate some revenue by selling collectible Deadmau5 Google Cardboard headsets for the experience.

Combining live-action and the latest CGI technology, the VR game has several levels. Users visit Deadmau5 in his studio and help him select one of his cars and maneuver through obstacles to arrive on time for a concert. The experience culminates in a live-audience performance of his new track, “Saved.”

The game app will be available for download in all major app stores, including iOS, Android and Samsung, starting July 27.

While fans can opt to use other compatible VR headsets, Absolut is promoting a collectible, limited-edition Deadmau5 Google Cardboard headset for $17.95.

Those who pre-order by July 8 at Absolutdeadmau5.com are guaranteed to receive the headset in time to be among the first “wave” of fans to experience the game on its release, reports Afdhel Aziz, director, Absolut Labs.

In addition to fostering eager fan engagement through the game, the brand is looking for ROI in the form of merchandising the collectible headset, says Aziz. With use of VR expanding rapidly, Absolut believes that Deadmau5 fans may want to buy the special headsets to enhance the game experience and their future VR watching experiences, he says.

The headsets are being produced on a print-on-demand basis Knox Labs. Knox, a Google partner company, also produced the VR headsets that The New York Times gave away to 1.3 million subscribers to its Sunday print edition last November, to encourage them to view The Times’ VR content.