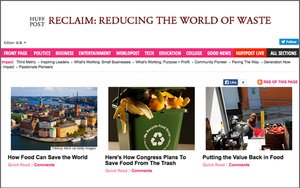 The Huffington Posthas launched a campaign to bring attention to food waste in the United States.

"Reclaim,” a multimedia endeavor led by executive editor Jo Confino, involves more than 30 reporters, editors, videographers and photographers and, according to Poynter, combines the Huffington Post’s journalism with activism from its audience.

Journalists will produce roughly 50 stories as part of the project and will encourage readers at the end of each article to sign petitions on food waste.

In a blog post, Confino said the project is teaming up with petition platform Change.org and the campaign organization EndFoodWaste.org to collect enough signatures to convince Walmart to sell “ugly” fruit and vegetables, which are often thrown away. Imperfect produce can be up to a third cheaper than its prettier counterparts, according to Confino.

For example, a Huffington Post article from Tuesday told the story of David Alvarez, a former produce associate at a Tampa, Florida, Walmart whose job it was to throw unsold tomatoes, potatoes and bananas into compost bins behind the store. Meanwhile, Alvarez’s $9.15 an hour job forced him to rely on food stamps to purchase unhealthy meals, like ramen.

The second part of the “Reclaim” campaign will kick off next month. It asks readers to encourage grocery chains to adopt “a common voluntary code for food date labeling, which will in turn give support to members of Congress who are seeking to establish a national standard for date labels,” Confino wrote.

Reclaim is partnering with FeedbackGlobal.org, which has the backing of the Rockefeller Foundation, on this part of the project.

Reclaim is also launching a 30-day challenge to help readers reduce their own waste. This will include shopping and cooking tips, ranging from “how to make stock from scraps to transforming your stale cookies into an epic pie.”

"It was basically searching for a story we felt brought together a number of issues we cared about and where we thought we could make a difference," Confino said.