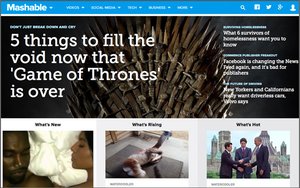 “Since the start of Mashable, social media has been at the core of our storytelling,” stated chief content officer Gregory Gittrich, who Springer and Fullon will report to. He added that they will help the brand “grow and build stronger relationships with our audience across our website, apps, social media and partner platforms.”

The audience and growth team is in charge of Mashable's social and paid media strategy. The team works closely with the company's data science team to expand its community and engagement across platforms, according to a spokesperson.

Andrew starts at Mashable on July 11.

Fullon will lead the company’s paid media strategy. He joins Mashable from Vox Media, where he spent two years as director of paid media across all eight of Vox Media's brands.

Fullon previously worked at BuzzFeed and Unruly Media in similar roles. He joined Mashable this week.