T-Mobile Gets Into The Home Run Derby 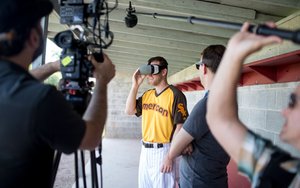 It’s one thing to watch Major League Baseball’s Home Run Derby during the All-Star break, but it’s another to actually experience it.

As part of its title sponsorship of the event on July 11, T-Mobile has developed a virtual reality experience in which regular fans can experience the thrill of stepping up to the plate and trying to knock one into the stands.

The VR experience will be available at the All-Star Fan Fest in San Diego this weekend, and in 2,200 T-Mobile stores nationwide. A video touting the initiative shows last year’s champion, Todd Frazier, taking swings in front of several green screens before trying it out himself.

Beyond the VR experience, T-Mobile is offering behind-the-scenes access, sideline chatter and commentary from player’s during the event via a “Social Lounge,” which will include feeds from several MLB social media accounts, including Twitter, Periscope and Facebook Live.

T-Mobile has also added a philanthropic component to the Home Run Derby by stationing a magenta jackpot in the stands. For every ball hit into the jackpot during regulation rounds, T-Mobile will donate $1,000 to the Boys & Girls Clubs of America. In the bonus round, the balls will be magenta-colored and every home run hit will earn $2,000 for the not-for-profit.

Finally, T-Mobile is offering consumers a chance to attend Game 1 of the 2016 World Series with an online “bracket challenge” to predict the winner of the Home Run Derby.

“Treating our customers like VIPs and changing the game is what T-Mobile is all about, and that’s exactly what we’re doing at this year’s Home Run Derby!” said John Legere, president and CEO of T-Mobile, in a statement. “We’re taking the Derby out of the ballpark and letting fans step up to the plate with 2015 Champion Todd Frazier in a first-of-its-kind VR experience for the Home Run Derby.”