And The Beat Goes On: Mayhem In The Streets Revives Baby Boomer Memories 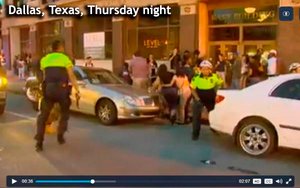 Baby Boomers who grew up in the 1960s are no doubt experiencing feelings of déjà vu when watching the mayhem that unfolded Thursday night in Dallas.

To us, it all seems so familiar. Riots and violence on city streets? It was as much a part of our childhood media experiences as “Rowan & Martin's Laugh-In” or “Captain Kangaroo.”

People of my generation sometimes scoff at members of the younger generations when they complain about the tumult and chaos of their world. We think, or sometimes say out loud: Oh, yeah? You didn't experience the 1960s. Or the ’70s. You think things are bad now? We had a president who resigned. (“The man said he was gonna give it up! He did resign, y’all,” Harold Melvin and the Blue Notes sang plaintively in 1975.)

True, our news media was limited to three broadcast networks, a couple of daily papers, and our weekly news magazines. But if the news media back then wasn't as immediate as today's instant options, it was no less alarming. As a child, my primary window on the outer world was Life magazine. And in the years 1967, 1968, 1969 and 1970 or thereabouts, this “window” opened my eyes to a world that seemed constantly in flames.

Riots on city streets, angry protesters with their middle fingers in the air in confrontations with police (leading eventually to a massacre at Kent State University in Ohio), drug use talked about everywhere, glossy color photos of wounded soldiers in bloody bandages lying in the mud of Vietnam, and of course, the assassinations of 1968 preceded by the murder of President Kennedy in 1963.

Contrary to the candy-colored Day-Glo memories many people seem to harbor about the era, I remember it primarily as harrowing. The video coming out of Dallas Thursday night brought it all back home. And so did the video that preceded the protest marches that unfolded in cities all over the United States on Thursday -- a black man subdued and fatally shot by police in Baton Rouge, and then the cell phone recording of another black man fatally shot in Minnesota following a traffic stop.

The immediacy of these videos, along with their very existence in the first place, is one of the clear differences between the media of today and the media of the 1960s. But the difference is mainly technological. The shock value feels like it’s the same, no matter what form of media conveys the message.

We Baby Boomers realize it’s not entirely fair to scoff at the younger generations with our comparisons to then vs. now. Certainly, the terrorist attacks of 9/11 and the long war that resulted from them are as significant for the younger people who grew up (and are still growing up) in the current era as any of the strife older people lived through in decades past.

Things have a way of not changing, though, don’t they? “The cities ablaze in the summer time,” the Temptations sang way back in 1970. “And oh, the beat goes on.”

news, tv
6 comments about "And The Beat Goes On: Mayhem In The Streets Revives Baby Boomer Memories ".
Check to receive email when comments are posted.
Read more comments >
Next story loading