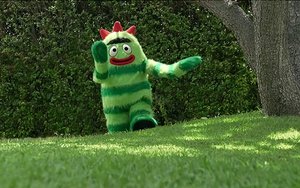 Wireless customers no longer need to fear Muno, Foofa, Brobee, and Toodee (from Yo Gabba Gabba) or LeBron James (from the Cleveland Cavaliers) with Verizon’s new data plan and app.

New advertising for the plans, announced last week, depicts these characters (as well as Enrique Iglesias and Selena Gomez) as threats to precious wireless data. In one spot (filmed at James’ alma mater high school), a high school student surreptitiously streams video of James’ on-court exploits when the basketball star appears to rat him out. “Don’t worry about it. They can’t hear me, I’m just in your head,” James tells the student. “No matter how you use your data, Verizon’s got your back,” says a voiceover.

“We’ve all been there when the big game is on, but we’re on the go, so we need to use our data to stream it,” Cathie McCloskey, director of corporate communications for Verizon, tells Marketing Daily. “There’s nobody better to talk about that than LeBron.”

Other spots depict the Yo Gabba Gabba characters emerging threateningly from a hedge as a father hands his young son a tablet to watch before a car trip, Iglesias adding some romance to a campfire coupling, and Gomez encouraging a fan to repeat playing her song indefinitely.

“We’ve made a conscious effort to better communicate with our customers in a way that’s human and clear to understand,” McCloskey says. “The marketing for the new My Verizon app and the new Verizon Plan does just that.”

The campaign advertises Verizon’s new data plans and app, which is designed for better account management (including data usage, upgrades and bill payment) through a phone.

“Our marketplace is as competitive and combative as it’s ever been, and we believe this new campaign will help us continue to lead, especially with key audiences such as millennials and multicultural consumers,” McCloskey says.

“This particular group of well-known artists, actors and athletes was selected to participate to help talk about these exciting new changes because they’re be able to help us reach our key audiences, including millennials, in a relatable and entertaining way,” McCloskey says.