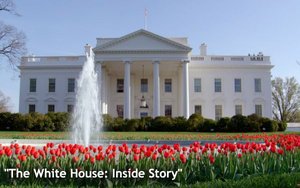 The last time I checked, the United States was supposed to be a democracy. And yet, our ruling potentates live in a palace where they are waited on hand and foot by butlers, chefs, chambermaids and heaven knows who else.

A new two-hour documentary about the White House premiering Tuesday night on PBS seems to assume that we’re all thrilled to learn how the First Family is made to feel comfortable in their palatial home by this army of servants.

But when you watch this over-long puff piece of a TV show – which plays like it was produced by the White House minister of propaganda – you can’t help but be dumbfounded by how obnoxious it all is.

You can start with the 100 employees it takes to sweep the floors, serve the food, mow the lawn and arrange the flowers. I am sure everybody in America will be heartened to learn that their tax dollars are hard at work supporting an entire unit inside the White House that is dedicated to cutting and arranging flowers for the lovely First Family and their guests.

Aww, poor First Family, this documentary wants you to think. They had to move into the unfamiliar surroundings of the White House! Let’s all feel sorry for them as the 100-person staff labors tirelessly to make sure they feel right at home.

I have an idea: How about cutting the staff in half to 50? That way, the children of the White House might then learn to pick up after themselves. Susan Ford Bales, daughter of Gerald and Betty Ford, still marvels at the white glove service she received as a spoiled teen living in the White House in the 1970s.

“It’s like the best five-star hotel and the best five-star service,” she says of this taxpayer-supported pleasure palace. She then goes on to say how she thought nothing of leaving her clothes lying around on the floor of her bedroom because, to her delight, servants would scoop them up, send them to the White House laundry and then return them washed and folded – all without lazy Susan having to say a word! It’s as if the president and his family live in Downton Abbey.

And the parties! Yes, it’s the White House – where the elite meet to eat. “An invitation to party here is a coveted prize, even for the biggest stars!” says narrator Dan Oreskes. Footage is then shown of celebrities such as Stevie Wonder, James Earl Jones and Sean Connery strolling into a state dinner. “It’s a chance for the elite of Hollywood and Washington to rub elbows with world leaders!” continues this documentary’s breathless narration. And James Earl Jones needs to “rub elbows” with world leaders because … ?

Even with a hundred staffers, challenges do arise, such as the time one of the White House chefs was informed that Barbara Bush would be delayed by bad weather from arriving home in time for the dessert course at an important banquet, and – sacré bleu! – zee chef had just put his soufflés in zee oven! Members of soufflé society will smile knowingly when this chef points out, obviously, that “soufflés won’t wait!”

Meanwhile, the rest of us (OK, me) are thinking: What all of these people really deserve – the First Families, their guests, Sean Connery, whoever – are a few well-aimed soufflés in the face. In case you are wondering, the soufflés turned out perfectly, the chef reports. Quel magnifique!

By the time this documentary regurgitated the story of how Jackie Kennedy redecorated the rooms she and her husband “inherited” from those dowdy Eisenhowers and made the White House safe for Pablo Casals, I had had enough. But I sat through the entire two hours anyway for one big reason: So you don’t have to. You can thank me later.

“The White House: Inside Story” premieres Tuesday night (July 12) at 8 Eastern on PBS.