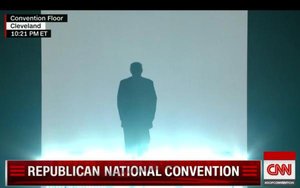 You would have thought Donald Trump had reinvented the wheel by the way the TV commentators gushed over the entrance he choreographed Monday night at the Republican National Convention in Cleveland.

He appeared at around 10:20 p.m. Eastern time, just after the lights inside the Quicken Loans Arena were dramatically dimmed. He emerged at the back of the stage shrouded in stage fog and backlit so he would be seen only in silhouette. He then strode into view as Queen’s “We Are the Champions” played on the arena’s sound system.

Trump’s appearance on Night 1 of the convention (pictured) broke with a long-standing tradition that the nominee not appear on a convention stage until the final night -- presumably to heighten the drama and suspense to such a level that the convention attendees’ excitement would be at a fever pitch.

I don’t want to brag, but I had already predicted that Trump would make himself visible at various times at the convention before Thursday. You can almost hear him saying to anyone who might try and advise him against it: “Just try and stop me.” If there is anything we’ve learned about Donald Trump, it’s this: If there’s a limelight anywhere nearby, he’s going to step into it.

His foggy entrance followed by his wife’s speech were the climactic scenes of the convention’s first night. On the subject of Trump’s entrance, the commentators I heard largely praised his showmanship. For the record, I was watching MSNBC at the time.

One commentator felt the entrance bore similarities to the way Trump appeared during the opening titles on “The Apprentice.” I went to YouTube to check this out and found that, yes, Trump was seen in various versions of the show’s opening striding in slow motion toward the camera in silhouette, but not shrouded in fake fog.

In addition, if memory serves, Rachel Maddow on Monday night more than once expressed her admiration for the way Trump suddenly “rose” from beneath the stage, although that wasn’t what happened. Instead, he walked on stage from behind the backdrop at stage right. There was no “rising” from anywhere.

Generally speaking, Trump was lauded for the inventiveness of this entrance, but the praise felt overblown. This kind of an entrance is really nothing new, although maybe it is for a political convention. Or maybe the nation’s political commentators are easily impressed by such theatrics.

Speaking of schlock, some commentators noted that in using the Queen song “We Are the Champions,” Trump defied a request made earlier this year by Brian May, guitarist for Queen, that he not use the song in his campaign. If May was trying to preserve the integrity of this 1977 hit, then he’s a little late since that ship sailed a long time ago. As a stadium standard, it has long been used in plenty of environments that are easily as hokey as the Republican convention.

Trump made this brief appearance to introduce a convention speech by his wife, Melania, a personality we can’t recall ever hearing or seeing speak in public. He reappeared afterwards to walk off stage with her.

In delivering her speech, Melania was poised, polished and articulate. Her remarks seemed designed for at least two purposes -- to introduce herself to those who don’t know much about her (which is just about everyone) and to soften her husband’s image.

Her speech conveyed the message that in private family environments, the polarizing firebrand of the campaign trail is really just a loving family man who only wants what’s best for his family and his country.

After she was finished, she too was largely praised. Then the morning came and all hell broke loose as portions of her speech came under suspicion that they had been plagiarized from a speech Michelle Obama delivered at the Democratic National Convention in 2008.

A tweet I saw Tuesday morning from Howard Kurtz of Fox News summed up how many of us felt. “Went to bed thinking Melania’s speech scored,” he wrote on Twitter. “Woke up to media frenzy over similar passages to Michelle O speech.”

And it’s only the first day.

Meanwhile, an update to yesterday’s TV blog about the new USA Network drama series called “Shooter,” which was due to premiere Tuesday night: Yesterday morning, I wrote about the show and lambasted it for its glorification of high-powered weapons, gun violence and sniper tactics at a time when all three are making terrible headlines here in the real world. A few hours after the column was posted, USA Network decided to delay the premiere of “Shooter” until an unspecified date this fall. Coincidence? You decide!