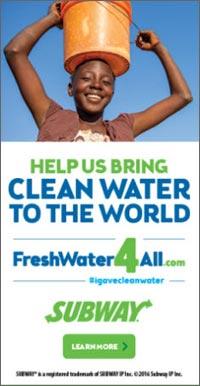 Subway and the Coca-Cola Company are partnering on a clean-water cause marketing campaign.

The donations will be used by World Vision — a Christian humanitarian organization that is the largest non-governmental supplier of clean water around the world — to work with partners in Kenya to construct a solar-powered water system providing clean water for 1,600-plus people. A 30-cent contribution is enough to supply clean drinking water to one person for one month, according to Subway.

The new water system will be located near a Coca-Cola Ekocenter within an area development project being operated by World Vision.

Subway has posted a video explaining the program on YouTube, in addition to social media postings about the effort.

Donations can also be made through www.freshwater4all.com, a dedicated Subway-branded site that also explains the program, and offers a running tally of donations (more than $38,000 in the first 24 hours).

Donors are being encouraged to tweet their participation using #igavecleanwater.