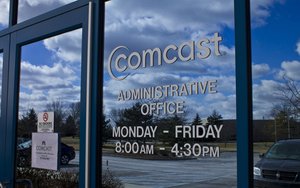 "A bargained-for exchange of information for service is a perfectly acceptable and widely used model throughout the U.S. economy, including the Internet ecosystem, and is consistent with decades of legal precedent and policy goals related to consumer protection and privacy," Comcast writes in a new FCC filing.

The broadband provider adds that a prohibition on a pay-for-privacy pricing system "would harm consumers by, among other things, depriving them of lower-priced offerings."

Comcast also contends the FCC "has no authority to prohibit or limit these types of programs."

The company's filing comes several weeks after a group of Democratic lawmakers urged the FCC to prohibit "pay-for-privacy" billing models, arguing that it's "counter to our nation's core principle that all Americans have a fundamental right to privacy." The lawmakers added that those pricing models "may disproportionately harm low-income customers, the elderly, and other vulnerable populations."

The FCC is considering issuing tough broadband privacy rules that would require broadband providers to obtain consumers' opt-in consent before tracking them for ad purposes. When the agency issued requests for comments about that proposal, regulators also sought comments about methods for obtaining consent, including whether providers should be able to charge consumers higher fees to avoid online tracking.

People who accept AT&T's ad targeting -- called the “Internet Preferences” program -- can purchase 1-GB service for $70 a month. Customers who don't want to participate in Internet Preferences are charged $99 a month for the same service. (After adding taxes and fees, the price difference reportedly ranges from $42 to $66.)

The company uses a similar pricing model in Austin, where it has operated a high-speed U-verse network since late 2013.