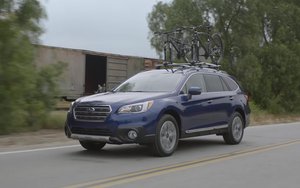 A new Subaru Outback TV spot plays up the brand’s adventurous spirit in an Americana setting.

“Boxcar,” from Carmichael Lynch, was filmed by The Cornershop’s Peter Thwaites. Both 60-second and 30-second versions launched this week.

In the spot, a free-spirited young woman daydreams of hopping a train as she and her husband set off to parts unknown in their Subaru Outback.

The music is by Americana singer-songwriter Langhorne Slim.

The Subaru Outback is a key vehicle in the Subaru family, and this spot showcases the versatility and its adventure-enabling qualities, says Brian A. Cavallucci, national advertising manager, Subaru of America, Inc.

“If you ask a Subaru owner what they love about their Subaru Outback, they will tell you it gives them a sense of adventure and that owning an Outback makes them feel like they can take an adventure anytime, anywhere,” Cavallucci tells Marketing Daily. “That’s exactly what “Boxcar” is about… Subaru owners taking their vehicle on a new adventure that only an Outback can deliver.”

“Boxcar" will be running as a mixture of :60’s and :30’s during the month of August. Shows include original programs on the likes of USA, FX, AMC and TNT. Additionally the spots will also run during Olympics coverage on NBCU channels as well as Late Night and Early Morning on Networks.

The ad is aimed at people who are looking for adventure and enjoy new experiences. Competitors include other vehicles in the midsize crossover category.

"This spot connects Subaru to the classic themes around the birth of American west and the associations of hopping a train for parts unknown,” says  Randy Hughes, executive creative director, Carmichael Lynch. “This feeling is alive and well in the Subaru Outback.”