Comcast Told To Stop Calling Itself The Fastest Broadband Provider 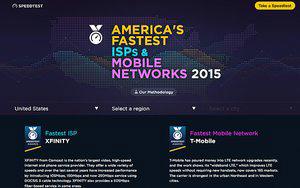 Comcast should stop bragging that it offers the "fastest Internet" in America, an ad watchdog said.

Comcast's ads, which were challenged by Verizon, included boasts like "XFINITY delivers the fastest Internet in America . . . Based on 2015 Speedtest.net testing,” according to the National Advertising Division, a self-regulatory unit administered by the Better Business Bureau.

The NAD said Comcast's statements were problematic because they convey that Comcast is faster than Verizon for all customers -- regardless of which "tier" of service they purchase.

"Given that user-selected data plans vary widely in download and upload speed capabilities, one reasonable consumer may take away from Comcast’s claim that 'XFINITY delivers the fastest Internet in America' is that in a head-to-head speed tier comparison XFINITY is fastest at any speed tier," the NAD writes.

But the NAD found that Ookla's methodology didn't support Comcast's ad claims. Ookla's conclusions were based on the speeds of the fastest 10% of an Internet service providers' customers, the NAD wrote.

"Ookla’s award is based on the fact that XFINITY delivers its fastest internet download speeds (the top 10%) to more consumers in America than other ISPs," the decision states. "The fact that XFINITY delivers faster download speeds to more consumers may reflect the popularity of Comcast’s top speed tiers....Thus, the Speedtest results are not consumer relevant to which ISP delivers the fastest speeds in each tier of service and may only reflect the popularity of an ISP’s 'fastest' speeds."

Comcast plans to appeal the finding to the National Advertising Review Board, according to the NAD.

This isn't the first time Comcast and Verizon have battled over broadband ads. Last month, the National Advertising Review Board sided with Comcast in a dispute over Verizon ads that bragged "FiOS Internet is Rated #1."