Following a weak 2014, digital out-of-home (DOOH) ad spending rebounded in 2015 and is pacing to have another good year in 2016, according to estimates released this week by PQ Media. At its current rate, DOOH is poised to reach about a third of all out-of-home media spending in 2016, making it a critical mass medium.

The momentum in ad spending mirrors rapid growth in consumer time spent with DOOH, thanks largely to the expansion of industry suppliers in both of its subgroups: digital place-based networks and digital billboards and signage.

According to PQ’s estimates, consumer exposure to DOOH media expanded 4% to an average of 54 minutes per week in 2015 and is on pace to grow 5% this year.

After a relatively weak 2014, digital place-based networks bounced back in 2015, with ad demand expanding 13.8% to $1.82 billion, marking its first double-digit increase since 2010. 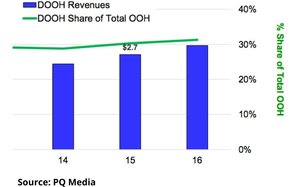