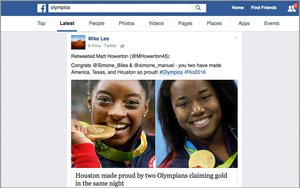 Despite a major shift to live-streaming, Facebook and its social media rivals appear to be underperforming at the Rio Olympics.

Indeed, only 33% of viewers are following the games on social media, compared with 46% who said they planned to follow along on Facebook and other platforms.

That's according to fresh findings from Fluent, which surveyed 2,970 U.S. adults at the end of July, and 3,081 a week into August.

Worse yet, only 3% of consumers who reported following the Olympics on social media said that Twitter is the platform they are using most often to do so.

“Even though the Olympics should theoretically be the perfect event for Twitter to capitalize on, the fact of the matter is they just haven’t been able to break through in a big way,” said Jordan Cohen, CMO at Fluent.

Not faring much better, 33% reported of social media users reported following the Olympics via Instagram, while 36% of respondents said they have followed via YouTube.

Besting all other platforms, a full 56% of social media users say they have been following the Olympics on Facebook.

After a concerted push into live-streaming video, why hasn’t Twitter performed better?

Among social media users, 38% said they didn’t have a Twitter account, while a whopping 1 in 5 said they weren’t even familiar with the platform.

Putting social channels to shame, 94% of viewers say they are watching the Olympics on TV, compared with only 33% on smartphones, tablets and computers.