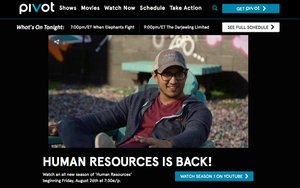 Participant Media, which owns Pivot, started the channel by building on the subscriber bases of Documentary Channel and Halogen TV. It ran a mix of original and acquired programming targeted to 18-34 year olds.

Pivot had a difficult time in obtaining and/or renewing distribution deals of late, according to reports.

This is similar to what Universal Sports faced, a sports network that closed down late last year. NBC Sports bought some of that network’s sports franchise assets; NBC was a minority owner of the channel.

“As the media landscape changes, we have been evaluating how we fulfill our mission to entertain and inspire social action around the world’s most pressing issues,” stated David Linde, CEO of Participant Media.“That process has led us to the decision to move away from owning and operating a cable network.”