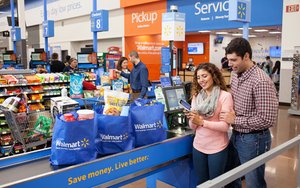 Amid retailers’ constant scrambling for better ways to attract customers both online and in stores, both Walmart and JCPenney are offering a peek at evolving consumer strategies.

Wal-Mart Stores, in announcing sales and profits that beat Wall Street expectations, also gives some insights into how its recent $3.3 billion acquisition of Jet.com will fit into its overall strategy. “Operating Walmart.com and Jet.com will allow us to reach even more customers and drive a higher level of growth more quickly,” says Doug McMillon, president and CEO of Wal-Mart Stores, in a recording prepared for investors.

He says Jet.com’s technology “rewards customers in real time with savings on a basket of goods and puts them more in charge of the price they pay. This empowers customers in a way that is true to the spirit of Walmart,” adding that the Bentonville, Ark.-based retailer’s advantage “has always been in providing the lowest prices on a basket, and Jet has created a unique way to deliver the lowest cost basket online.”

The acquisition comes at a time when the company is intensifying its drive to online dominance, and its ongoing challenge to Amazon. “We continue to see proof that our customers enjoy a seamless shopping experience. The distinctions that we talk about today between stores, apps, pick-up, delivery and sites are continuing to blur into the background for customers. For them, it’s just Walmart.”

E-commerce sales rose 13%, mostly driven by the roll-out of online grocery, and the growth of pick-up in stores and clubs.

In the U.S., comparable-store sales at Walmart climbed 1.6%, the eight straight quarter of sales gains and the seventh consecutive quarter of increasing traffic. It says the improvement stems from progress in customer experience, as well as mobile options like Walmart Pay, now available in all its stores.

JC Penney also had big news, announcing a three-year plan that has it backing away from national brands, and instead placing its bets on private-label brands like Liz Claiborne, Arizona and Michael Strahan. And it’s upping the emphasis on plus-size fashion, home and beauty products. The new strategy is meant to build both value for shoppers and brand differentiation, as the Plano, Tex.-based retailer continues to battle on the comeback trail. The new plan calls for earning 70% of its sales from private-label brands by 2019, up from 52% last year.

In order to set itself further apart from the likes of Kohl’s and Macy’s, it says it plans to sharpen its appeal by continuing its commitment to special sizes; refreshing its home stores, including the previously announced plan to get back in the big-appliance game, and adding more beauty, including more Sephora units and InStyle salons.

And it, too, is refocusing on omnichannel initiatives, including a redesigned store app, shipping to any JC Penney store, same-day pickup and speedier home deliveries.