A John McLaughlin Memory That's So Old, It's On VHS 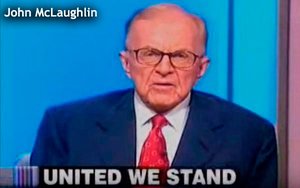 The first and only time I came face to face with John McLaughlin, I thought he was nuts.

But I eventually came to understand that he wasn’t really crazy. He was just another TV talk-show host cut from the same cloth as so many others.

When you appear on their shows, some of them will bellow at you at a volume that belies your close proximity to them. Others are prone to shooting from the lip. Their questions and statements cascade from their mouths so haphazardly that they defy comprehension. You then struggle to reply, only to learn that they are not listening to you anyway.

But all of this knowledge and awareness of the ways of TV talk-show hosts would come to me much later on. Meanwhile, time-travel with me back to June 1989, to Fort Lee, New Jersey, and the studios of a new cable channel launched by NBC just two months earlier called the Consumer News and Business Channel (CNBC).

I returned there (figuratively) earlier this week by doing something I almost never do -- digging out a videocassette of some of my old TV appearances and watching one of them (yes, I still possess a working VCR).

The occasion for this personal archaeology was McLaughlin’s death this past Tuesday at age 89. Jogging my memory, I was certain I had once appeared on a McLaughlin show and I was right: The show was “McLaughlin,” the nightly talk show he hosted on CNBC from 1989 to 1994. The appearance I made on this show on June 15, 1989 was the first TV appearance I ever made. I was a reporter in New York writing about TV and radio for a weekly trade publication called Electronic Media, published by Crain.

The subject was talk radio, and the principal guests were two practitioners of the form -- Bob Grant of WABC-AM in New York and Jerry Williams of WRKO-AM in Boston. They are both dead now.

The main talking point of this “McLaughlin” episode was the recent announcement by Williams that he was forming a new organization of talk-radio personalities that would eventually become the National Association of Radio Talk Show Hosts.

Well, the idea that the nation’s most opinionated and influential radio talk-show hosts would be organizing into a group to share ideas and compare notes sent McLaughlin into a tizzy. In an attempt to generate heat during the show, he would suddenly adopt an urgent, alarmed tone and blurt out questions such as “Are you going to have a cabal?!” At one point, he even leveled this accusation: “Your role is to delegitimize the United States!”

While he bellowed, Grant and Williams sat there in their swivel chairs looking like they didn’t have a care in the world.

I was brought on as part of a panel of three journalists who would be permitted to ask these two radio personalities some questions of our own after McLaughlin himself had exhausted his own line of inquiry. The other two were Jill Brooke, then a TV reporter and radio columnist at the New York Post, and Fleming Meeks, identified as a reporter for Forbes magazine (he is now executive editor of Barron’s).

From the standpoint of technology, this episode of “McLaughlin” seems quaint indeed.  For example, when McLaughlin leveled his “cabal” accusation, Williams calmly admitted that his association of radio talk-show hosts would indeed “use fax machines to coordinate efforts.”

And yet the more things change, the more things stay the same, for who should emerge as a topic of conversation but Donald Trump, then 43. For reasons McLaughlin did not specify, he suddenly asked the two radio personalities what they thought of him.

Grant replied airily that he liked him, but didn’t elaborate. Williams said he did not like him because of a recent incident in which Trump had appeared on Larry King's CNN talk show and insulted Larry by complaining, live on the air, about Larry’s bad breath. Williams thought this was a mean thing to do.

When an audience member asked them what they thought of Howard Stern, Grant answered with one word: “Filth.” Williams’ terse answer: “Not a talk show host.”

In later years, I would encounter all kinds of interviewers on TV. Of the ones referenced above, Chris Matthews was the one whose questions were sometimes so garbled that answering them could be tricky. In one appearance I made on “Hardball,” I actually burst out laughing at the absurdity of something he asked me that I did not, and could not, comprehend.

At another time in my career, I appeared fairly often on Court TV, where Nancy Grace was also prone to surprising me with questions out of left field. Though they were unexpected, I remember her as possibly the liveliest interviewer I have ever appeared with on TV. The most fun too.

As for McLaughlin, I never saw him or appeared on any of his shows again.