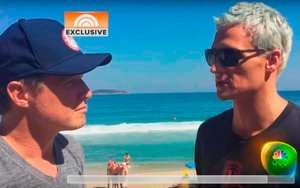 Of all the NBC Olympics personalities who became involved in the Ryan Lochte Rio robbery tall tale, Billy Bush has emerged as the one who was the most bamboozled.

But leaving the issue of celebrity journalism vs. plain journalism alone for a moment, Bush is being criticized for clinging too long to Lochte’s original story that Lochte and three teammates were robbed at gunpoint at a Rio de Janeiro gas station in the wee hours of the morning a week ago Sunday.

Bush wound up doing the first interview with Lochte after the incident later in the day on Sunday. That’s them in the picture accompanying this bog post doing the interview on a Rio beach (Bush on the left, Lochte on the right).

In the days that followed, Lochte’s story fell apart. By Thursday, with much (if not all) of the story in doubt, Bush still seemed to be defending the version Lochte gave him. In a piece of video that was widely posted all over the Internet, Al Roker is seen on NBC telling (if not scolding) Bush in no uncertain terms that Lochte straight-up lied to him.

Certainly, Al Roker -- traditionally a TV weather personality -- is not known either for conducting hard-hitting, skeptical interviews. But he has evidently been around the news business long enough to recognize BS when he hears it -- especially at this point in the Lochte story in which the tale had by then been largely debunked.

So now, critics are saying Bush should have somehow detected Lochte’s malarkey from the get-go. He should have asked more pointed questions about the alleged robbers, for example, they say. Or he should have pressed Lochte to tell him exactly how much was stolen -- the kind of detailed questioning, the critics say, that might have revealed cracks in Lochte’s narrative.

With the benefit of 20/20 hindsight, the naysayers seem to be indicating that some other journalist -- one perhaps without a celebrity journalism background -- might have been more adept at getting at the truth earlier in this story’s life cycle.

They’re wrong, however, since lies are not easy to detect. For example, criminals lie to cops all the time. And some cops are experienced enough to know it -- at least some of the time. Some journalists have this ability too -- but definitely not always. I have long said about interview subjects that you can’t force them to tell you the truth. You can only hope to ask intelligent questions. What they do with the questions is up to them and largely out of a journalist’s hands.

This was the situation with Bush, although it’s also correct to surmise that he isn’t wired to ask deeper questions. And that’s precisely because of his background in celebrity news. He is known mainly for his work on “Access Hollywood.” This is the kind of show in which interviews with celebrities amount to little more than happy talk.

While entertainment-news magazines of this type do traffic in so-called “hard” news occasionally -- as when a celebrity gets tripped up in a scandal -- when it comes to actually interviewing celebrities face-to-face, softball is the game of choice.

Thus, when Bush wound up on that beach interviewing this American swimming superstar -- for NBC, the network of the Olympics, of course -- this interview turned out to be less of an interrogation than an opportunity for Lochte to freely spin his robbery yarn and, in hindsight, make Bush seem like a gullible amateur.

That’s not fair to Bush, though. Lochte’s the one who lied, and Bush was far from the only person who believed him. We all did, right up until the moment the authorities in Brazil gave evidence to the contrary.

Yes, regular journalism is supposed to be more hard-hitting, and thus more effective, in situations like this than celebrity “journalism.” But journalists get lied to every day. You don’t have to be a practitioner of celebrity journalism to get bamboozled.