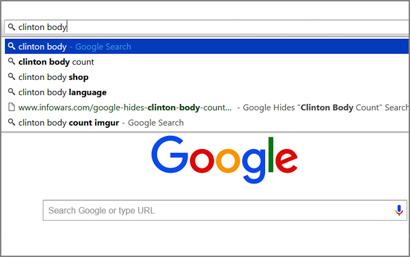 It's an interesting read on the conspiracy theory of search query results for the phrase "Clinton body count," and it could be valid, but a simple search Tuesday found nothing to support this example of the theory.

Conspiracy theories are interesting. The theory suggests Google has been caught once again censoring negative information about Hillary Clinton and asks the reader to "try it for yourself." I did. And I found autocomplete suggestions and a long list of articles on google.com describing the alleged cover-up known as the Clinton body count.

The Clinton body count is a list of alleged murders connected to the couple. The political rumor claims Bill Clinton quietly did away with several dozen people over a span of three decades who had incriminating evidence about him.

In follows the same vein of rumors circulating around former President John Fitzgerald Kennedy, suggesting close to fifty colleagues, advisors, and citizens who were about to testify against the Clintons died in suspect circumstances (Snopes has a complete list of all who died and their circumstances). The unstated implication suggests Bill Clinton, or someone close to him, was behind each untimely demise.

The  Infowars article claims searching on Google for "Clinton body count" doesn't return the same search results as searching for the same query on Bing or Yahoo. I tried all three engines and for me each returns very similar results. Since the article was published on Monday, and today is Tuesday, it's not likely Google engineers made tweaks to adjust the algorithm.

On the other hand, the article also points to several other instances of reports that Google manipulates search results, even this one from Source Fed published in June 2016, which then references Google's response to the video on YouTube published in the Washington Times.

Is "manipulate" the correct word choice? Engines do have algorithms that feed off of the popularity of search terms used by individuals searching for information in a specific region of the world. Each search engine relies on an algorithm that tells it what information to display first and why.

Yes, people search for information on google.com under the assumption that search query results are based on the principal that the more people care about, search for or visit something it will rise to the top and be seen by more people. And we assume that the recommendations offered by autocomplete are answers to questions people have been searching for to answer a question.

What are your thoughts on whether or not Google manipulates search query results to give those searching on google.com a skewed view?