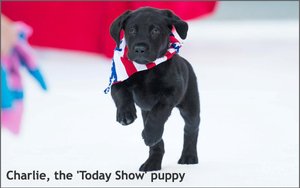 America wants to know: Who will walk the “Today Show’s” new puppy in inclement weather?

You can bet your bottom dollar you won’t be seeing Matt Lauer, Savannah Guthrie or Al Roker walking this little black lab around 30 Rockefeller Plaza in the rain or snow. Or maybe they will -- trailed by a camera crew on hand to capture all the action, with the possible exception of the doggy-doo clean-up portion required under New York City law. Anyone seen the intern?

The show’s new puppy is named Charlie, a name chosen by vote of “Today Show” viewers -- approximately 22,000 of them who participated in the balloting, according to NBC. Plans call for 8-week-old Charlie to grow up before the eyes of the “Today Show” audience.

Cute li’l Charlie will be a part of the show’s “family” for 16 months, NBC said this week. The show is positioning its new canine family member as a “puppy with a purpose” -- a purpose other than attracting eyeballs, as a cute puppy is almost certain to do.

This puppy’s purpose is to undergo training on TV as a service dog. Charlie is being provided to the show by America’s VetDogs, a group that trains service dogs and then offers them up for adoption by veterans and first-responders who need them.

Charlie is the second of these service dogs to take up residence at the “Today Show” studios. The last one was named Wrangler. As pet owners well know, raising a puppy requires a great deal of commitment. For a TV show, it’s no easy feat. Whether Charlie will actually live in Studio 1A for 24 hours a day is something the TV Blog does not know.

Charlie’s benevolent purpose is a great way to position this new addition to “Today.” First of all, no critic ever benefited from coming out against puppies. And when a puppy is being used for a well-meaning purpose such as providing a much-needed service companion to a veteran, no critic would dare react cynically to that either.

But cynicism is a common characteristic of the age we live in. A cynic might then wonder what the reaction at “Good Morning America” might be to this new “Today Show” puppy. You can almost imagine the panicky discussions: “Hey, did you hear? ‘Today’ got another puppy! How about if we get a kitten?”

However, cats and dogs are hardly comparable, especially when it comes to providing companionship and service to those in need (though cat fanciers are free to disagree). Still, with a revival of “Cats” now playing on Broadway not far from the “GMA” studios, a kitten (or perhaps an entire litter of them) might be just the thing “GMA” needs to compete with 8-week-old Charlie.

And no one has to walk a cat when it’s raining outside either.