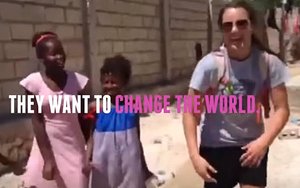 Taco Bell and its creative agency are turning good works into video content that should generate goodwill for the QSR brand, as well as further the cause of helping high school students go on to college.

Early this year, Taco Bell and O’Keefe Reinhard & Paul collaborated to bring the brand’s “Live Más” motto to life by helping students who are “not traditionally served by academic or athletic awards,” but want to change the world for the better, according to the agency.

The Taco Bell Foundation launched the Live MásScholarship Fund to award 220 post-high school education scholarships to “the next generation of innovators, creators and dreamers.”
Rather than being asked to write essays or submit records of their achievements, entrants are asked to submit short (under 2 minutes) videos that tell the stories of their “life’s passion.”

The videos can be simple testimonials, or use animation or other techniques, at the entrant’s discretion. “This is not about how well you can make a film — we just want you to show us your talents and explain why you should be considered for a Live MásScholarship,” explains the scholarship fund’s site.

The scholarship committee selected the first 20 recipients, or “Charter Class,” who will collectively receive more than $1 million in scholarships, ranging from $2,500 to $25,000 each.

In July, O’Keefe Reinhard & Paul brought eight of the chosen recipients to its Chicago headquarters, along with Bow & Arrow productions, to bring the students into the process of creating more films. These films will be used in a campaign to bring in more submissions for the next round of scholarship awards (that entrant process will open soon), as well as deliver the brand’s “Live Más” message. The group conducted creative brainstorming for two days, reports the agency.

The new campaign consists of a four-episode docu-series, called “The Charter Class,” directed by Sundance award-winning cinematographer Andrew Droz Palermo. Each video focuses on the life and dreams of one of four of the scholarship winners.

The series is being kicked off with a 30-second television ad capsulizing the scholarship program. The eight winners helped the agency write the voiceover script for this ad, and footage from their own original video scholarship submissions is incorporated in the ad.

Per Digitas’s media plan, the ad launched this week on A Plus and Upworthy and YouTube (see below). It will also be featured on the scholarship site. In addition, a teaser of the ad will air during the MTV Video Music Awards on August 28.

The documentaries featuring four of the first scholarship winners are now posted on Taco Bell’s YouTube channel, and these and other videos can also be found in a Taco Bell Foundation area on YouTube.