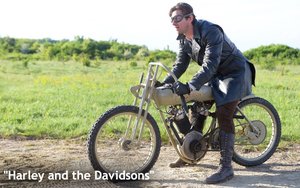 Fortunately for the person or persons who composed the title of this Discovery miniseries, there was, in fact, just one Harley and at least two Davidsons involved in the creation of this iconic American company.

Hence, you get the title “Harley and the Davidsons” (which sounds a little like “Harry and the Hendersons”).

The title accomplishes the neat trick of including both of the words “Harley” and “Davidson” concisely, which leaves no doubt about what this TV show is about. It is about Harley-Davidson. It is six hours long, divided into three parts -- each encompassing approximately a decade in the company’s first 30 years starting in 1903. It premieres Labor Day evening (next Monday).

It is a rare scripted production for the mostly unscripted Discovery Channel -- its second scripted miniseries, to be precise. The first one was the Alaska Gold Rush miniseries called “Klondike” that aired in 2014.

In “Harley and the Davidsons,” you will learn the semi-fictionalized story of how Bill Harley, a young draftsman and aspiring mechanical engineer living in Milwaukee (where the company is still based today), joined forces with his more outgoing friend, Arthur Davidson, to experiment with the idea of placing a motor on a bicycle.

Eventually, Arthur’s swashbuckling older brother, Walter, joins them and the three swashbuckle their way into the nascent world of motorcycle development and manufacturing. It was an era in which the motorization of formerly unmotorized means of transportation such as bicycles and horse-drawn carriages was in its infancy.

They were far from the only people designing and building the new motorized bicycles. In the miniseries, the competition with other early motorcycle brands such as Indian, Curtiss and Excelsior is depicted as fierce. The companies competed for news coverage, dealerships and, to some extent, qualified personnel.

In the miniseries, the competition takes the form of a series of barnstorming motorcycle races as the rival companies try to one-up each other in the areas of speed and endurance.

The miniseries positions the newly minted Harley-Davidson Motor Corp. as an early proponent of speed and horsepower -- the originators of what you might call the “muscle” motorcycle. Whether this is in fact true is difficult to determine. This is dramatized history, folks, and for those who are not at all familiar with the early history of motorcycle development (which would be just about all of us) it will be impossible to determine where fact gives way to fiction.

Still, many of the visual details seem accurate, most notably the motorcycles themselves. The producers of “Harley and the Davidsons” somehow wrangled a number of these rare early bicycle-motorcycles or, at the very least, managed to build replicas that look like the real thing.

And if aspects of the miniseries are not factually accurate, then the flavor of the era has an authentic feel. In the world depicted in the miniseries, mechanical engines were on the verge of revolutionizing personal transportation -- turning bicycles into motorcycles and carriages into automobiles. Airplanes would soon follow.

It was a largely unregulated world, and an unsafe one too. In the miniseries, various engines are constantly exploding or otherwise catching fire, seriously injuring the early motorcycle racers and sometimes killing them.

One assumes the same kinds of things were happening in the nascent automobile industry too, from the races and explosions to the resultant carnage. In “Harley and the Davidsons,” for example, motorcycles are already drawing attention for the risks involved in riding them, with one newspaper reporter coining the phrase “murder-cycles” in a series of articles. Arthur Davidson nevertheless views such stories as publicity beneficial to the Harley-Davidson brand, so no harm done.

“Harley and the Davidsons” airs over three nights – Monday through Wednesday (Sept. 5-7) – at 9 Eastern on Discovery Channel.