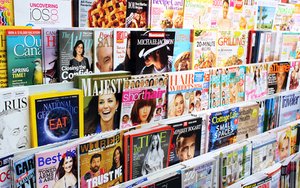 ESPN The Magazine and The Atlantic took the top spots for highest total audience in July 2016 and most growth versus a year ago, respectively, according to the most recent Magazine Media 360° Brand Audience Report.

The report also revealed the average audience for magazine brands is up 5.1% from this time last year.

There was “modest change” in print and digital audiences for magazine brands, according to MPA, with a growth of 1.2%, as well as a decline in desktop Web audiences by 12.5%. However, the report tracked strong mobile Web numbers, with an increase of 19%. Video audiences grew by a whopping 43.6% compared to last year.

For July 2016, the top five participating brands that had the highest total audience — across print, Web, mobile Web and video — were ESPN The Magazine, People, Forbes, WebMD and Allrecipes.

Eight magazine brands saw an increase across every one of the four platforms: Good Housekeeping, Harper’s Bazaar, Self, Smithsonian, The Atlantic, The New Yorker, Traditional Home and Vogue.