Twenty Years After Her Murder, TV Is Still Exploiting JonBenet 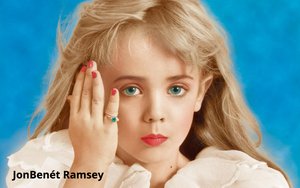 TV will not leave this tragic, murdered little girl alone.

Rest in peace? Not when you’re a famous murder victim, and the crime remains unsolved after 20 years. That’s a recipe for TV exploitation.

So here comes 14 hours (that we know of) of TV programming in the space of 20 days in September in which the terrible story of JonBenét Ramsey will be exhumed yet again.

And after all that, the results of all this “new” investigating will likely add up to nothing, despite the claims by some of these programs that they have uncovered something new. A press release for one of them even contains wording that implies they solved the crime, but it’s reasonable to be skeptical of such assertions.

Yes, this upcoming spate of JonBenét programming might shed new light on aspects of the evidence from her murder -- based on two decades of advances in forensic science, for instance.

And some of the shows include various interviews being billed as “new” and “exclusive” too, such as Dr. Phil’s big “get” -- JonBenét’s brother, Burke, now 29, who has never been interviewed on TV before. Years ago, when he was a boy, he was even a suspect.

All of these JonBenét shows are being positioned as commemorations of the 20th anniversary of the little girl’s murder. Never mind that the actual anniversary doesn’t fall until December. JonBenét, 6, was found dead in her Boulder, Colorado home on Dec. 26, 1996, the day after Christmas. Oh, well. In the TV business, calendars are nothing if not malleable; anniversaries are often made to fall when TV networks want them to, the truth be damned.

Besides, scheduling shows on a high-profile subject such as JonBenét Ramsey in the middle of the holidays in December when people are distracted and not watching as much TV just won’t do. September’s the time to make a splash in conjunction with the start of the fall TV season.

So that’s what “Dr. Phil” is doing with this interview with Burke Ramsey that will air over three “Dr. Phil” shows Sept. 12 (the start of the show’s 15th season), Sept. 13 and Sept. 19. " 'Dr. Phil' returns for its 15th hit season with the exclusive interview revealing shocking, never-before-heard details about one of America’s most notorious cold cases," says a breathless press release from the show.

It’s Burke Ramsey’s “first-ever media interview,” notes the press release, which then goes on to promise a worldwide exclusive: “Never-seen-before interrogation interviews conducted with Burke at ages 9 and 12 will be seen publicly for the first time.”

But wait a minute -- A&E is claiming a Burke Ramsey interrogation-tape exclusive from 1998 for its two-hour documentary titled “The Killing of JonBenét: The Truth Uncovered” (airing Monday, Sept. 5, at 9 p.m. Eastern). Is this the same thing being ballyhooed by “Dr. Phil” or something different? Who knows?

The A&E release then makes this promise: “Exclusive and shocking DNA evidence sheds new light on who actually committed the murder.” Does this mean they solved it or something? Don’t hold your breath.

Meanwhile, the lurid Investigation Discovery channel is at least having the good taste (a rarity for them) to admit that its own three-part JonBenét documentary won’t solve the case. “The fact is, we may never definitively know the answer … but ID will re-explore every angle, every shred of evidence, and every ‘whodunit’ theory to allow our viewers to draw their own conclusions on the case,” says the network’s president, Henry Schleiff, in an ID press release.

ID’s “JonBenét: An American Murder Mystery” airs Sept. 12, 13 and 14 at 10 p.m. Eastern on each night. This three-hour mini-docuseries is produced in association with American Media Inc., parent company of the National Enquirer.

CBS gave this show a bare-bones title but a wordy position in the pantheon of TV-show classifications. The network’s press release says this is “a six-hour limited event docuseries.” It boasts “original investigators” and “new experts” who will “unite to re-examine the tragic case.”

Their efforts were apparently elaborate. They included “meticulously recreating the crime scene by rebuilding full-scale replicas of key rooms from the Ramsey house.” Clearly, the budget for this one was network-sized. How it will do on three nights of prime time at the outset of the new fall TV season is anybody’s guess.

As for JonBenét, the mystery of her death remains unsolved after 20 years of these kinds of documentaries and reexaminations, dozens of which have already covered much of the same ground over and over and over again. It would be nice if one would come along that actually solves this case. Then maybe this tragic little girl’s story could come to an end, and TV can stop exploiting her story every couple of years as entertainment.