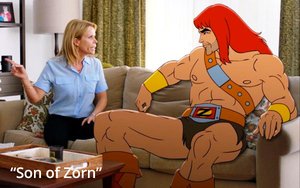 Maybe the key to selling a TV show is to make sure the network executives are drunk.

How else can you explain the process that may have gone into approving the concept for “Son of Zorn,” in which a cartoon warrior named Zorn tries to adapt to life among real people in southern California?

This coming Sunday (9/11), this half-hour comedy becomes the first of the new Fox fall shows to make its debut. The episode -- airing at 8 p.m. Eastern -- is being billed as a “preview.” The show's official premiere date is Sunday, Sept. 25, at 8:30 -- its regular time period.

The snarky drunk comment in this blog’s first sentence is really meant as a way of getting into a discussion about this situation comedy’s peculiar situation and subsequent execution. It’s the kind of show you might expect to encounter elsewhere such as Adult Swim, for instance -- where concepts like this are de rigueur.

Or maybe this show’s blending of animation with live-action appealed to the architects of Fox’s prime-time lineup because the schedule they have fashioned for Sunday nights is a combination of animated (“The Simpsons,” “Family Guy”) and live-action shows (“Last Man on Earth,” “Brooklyn Nine-Nine”). “Son of Zorn” would seem to fit in both categories.

The drunk comment is not intended as an indication that this is a bad show either. On the contrary, it is attractive enough to at least draw you in and keep you involved in it through the premiere episode. The question is: Will you care enough to return for Episode Two?

The question is appropriate because the show feels like a one-joke gimmick. There’s this muscle-bound animated warrior guy carrying a huge sword and wearing what appears to be a loincloth, and there’s everybody else -- ordinary, live-action people including his ex-wife (played by Cheryl Hines of “Curb Your Enthusiasm”), their teenage son Alan -- short for Alangulon (Johnny Pemberton), and her boyfriend (Tim Meadows). Jason Sudeikis provides the voice of Zorn.

So the gimmick is: How will this work out? And a subcategory might be: How is this possible?

The human characters live in a typical suburban neighborhood in Orange County, California that is a far cry from the tumultuous animated island known as Zephyria where Zorn’s everyday life consists of a series of bloody battles and swordplay with an array of exotic, comic book-style foes.

One day, he apparently decides to pay a visit to Orange County to reconnect with Alangulon (the “son of Zorn” of the show’s title), with whom he is estranged. After arriving there, Zorn realizes it will take some time to reestablish his relationship with his son, and he decides to stay for an indefinite period. So he leases an apartment and somehow gets an office job.

And yet he’s a cartoon. So even though you know that you are supposed to accept this idea at face value, you can’t help but be constantly asking yourself: Why is no one in this show expressing any shock or surprise that this towering, shirtless, two-dimensional guy is in their midst?

Certainly, they express a mild surprise at aspects of his behavior when he cleaves a conference table in half, for example, but other than that, they seem very accepting of this man’s obvious “differences.” Maybe that’s one of the things this show is designed to satirize -- that society today is so politically correct that questioning this character’s appearance, demeanor or lifestyle choices would be socially unacceptable.

It’s another sign of how much society norms have evolved in some of our lifetimes. When many of us were children, TV had a handful of shows in which fish-out-of-water families who were obviously “different” lived their lives alongside “normal” people. These were “The Munsters” and “The Addams Family,” of course, and possibly a few others. In episode after episode, the “regular” people in these shows were never accepting of their neighbors’ bizarre ways.

Here in the much-more-tolerant present day, however, an oversized animated warrior can suddenly arrive from a fictional animated island in the Pacific and almost no one bats an eyelash.