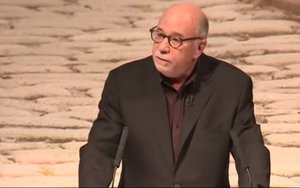 The illustrious and ever-sharp Bob Hoffman has spoken. If you don't know who Bob Hoffman is, then you don't really work in the advertising industry. That, or you have not steeped yourself in the wisdom of this man. Hoffman has had a long career in advertising including 15 years working on the McDonald's account. He is quick to point out that it was "just" regional work, but, clearly he has a history with the brand.

In a recent blog post, Hoffman has a few things to say about the new McDonald's CMO and the creation of Omnicom's "agency of the future" created specifically to handle the McDonald's account, which Omnicom recently wrested from Publicis. Hoffman thinks Omnicom's "agency of the future" is a failure waiting to happen along the lines of Dell's Enfatico -- which, as we all all know, was an unmitigated disaster.

Hoffman lays out three points as to why he feels the whole thing is a non-starter. Chiefly, he thinks the agency will have full responsibility but zero authority and control when it comes to success metrics. In other words, the agency can do all it wants, but it will have no control over how what it does is measured.

Hoffman holds no optimism for Omnicom and writes: "They will create idea after idea and all will eventually wind up in the McHomogenizer and come out as price/item promotions. Maybe they'll be allowed an 8-week honeymoon at which they'll introduce a new campaign, but after 8 weeks the campaign will just devolve into a tagline on price-item spots."

Furthermore, he adds: “No national advertising plan at McDonald's ever gets approved without a positive vote of the franchisees. If you've never presented advertising plans to a ballroom full of franchisees you simply haven't lived. Further, under this scenario, the agency is perfectly positioned for the delegation of blame. They will have no authority over either pricing or operations. McDonald's sales performance is far more related to prices and operations than anything the agency does.”

advertiser-agency relationship
5 comments about "This Ad Man Thinks The 'Agency of the Future' Omnicom Created For McDonald's Is Now Doomed For Failure".
Check to receive email when comments are posted.
Read more comments >
Next story loading