Trump Is King Of Earned Media 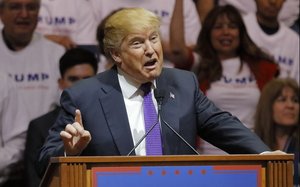 For the month of August, Trump pulled in $509.3 million in earned media compared to Clinton’s $364.2 million, according to mediaQuant, an earned media measurement company. In July -- the month in which respective party conventions were held -- the race was closer, with Trump getting $573.4 million compared to $539.8 million for Clinton.

Earned media is defined as press interviews and appearances on all media including TV, radio, online and print publications.

Overall, for the trailing 12-month period, Trump has amassed $4.6 billion worth of earned media versus Clinton’s $2.5 billion.

In recent days, Trump has kick-started his first paid TV advertising campaign, which analysts says is traditionally very late for a presidential candidate. Trump said TV advertising has not been necessary, given his wall-to-wall TV appearances .