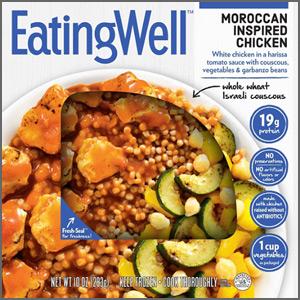 Meredith’s recent licensing deals — which includes a deal between Shape magazine and Apparel Bridge for the new Shape Active collection of women’s active wear sold at Dicks Sporting Goods, Kohl’s and Equinox gyms — is a way for the company to expand its brand recognition into new businesses.

The frozen entrées were crafted with input from EatingWell editors and will adhere to the magazine’s guidelines for healthy eating.

The meals have whole grains, one cup of vegetables, 13 or more grams of protein, meat raised without antibiotics. Each meal is free of artificial colors and flavors, preservatives, MSG and hydrogenated oils.

The entrées have a new kind of “Fresh-Seal” packaging, a plastic sealed cut-away in the carton that gives consumers a clear view of the enclosed meal. It also reportedly helps maintain freshness, reduce freezer burn and improve shelf life.

"We have great faith in the growth potential of the EatingWell brand to expand from its strong media footprint into food products and beyond," stated Elise Contarsy, VP of Meredith Brand Licensing.

The magazine’s foray into food is not unlike The New York Times' new Meal Kit service, which offers pre-packaged meal kits starting at $27 per meal. NYT Cooking fans can subscribe to the service online and choose from a variety of options, including subscriptions for multiple meals or a la carte selections, which are delivered to consumers' doors within 48 hours of purchase.