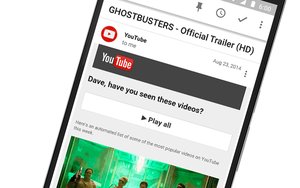 Google’s Gmail email applications will begin supporting responsive email design by the end of the month, the technology giant announced on Wednesday.

Designed emails will now render correctly on any device that email subscribers access their Gmail on, meaning that mobile users will now have the same experience that desktop users do.

“Text, links, and even buttons will enlarge to make reading and tapping easier on a smaller screen,” writes Pierce Vollucci, product manager at Gmail, on the company’s blog. “If you’re on desktop, you’ll also see improvements, since emails designed for mobile can also adapt to fit larger screens.”

“This is the most ground-breaking development for email rendering ever in the industry,” says Kevin Mandeville, content designer at Litmus.

Mandeville discussed the implications of the news on email design in a conversation with Email Marketing Daily.

Mandeville emphasizes how much time developers have now saved, and how that time can be expended on more creative designs and projects. Before, he says that designers would have needed to send several hours per every single email that had multiple columns.

When you stack testing and troubleshooting on top of that, it's self-evident that Gmail was becoming a big, time-consuming headache for email designers.

“This allows us to focus more on the creative, creating a great experience for the end subscriber with out being bogged down in the design process,” says Mandeville. “It will make responsive design more accessible to more people building emails and give a better result for the end-user -- a nice, gorgeous, mobile-friendly design when they are in Gmail.

Justin Khoo, email developer at Email on Acid, also praised Google’s decision to incorporate responsive design in its family of email products, which includes the mobile application Inbox. He says it will be a “dramatic improvement” to email design.

Google’s email update, expected by the end of the month, is a critical addition for email marketers looking to engage with mobile users.

The ratio of mobile to desktop clicks over the past year has changed rapidly, with mobile growing by 15% since 2015 according to Yes Lifecycle Marketing’s latest email benchmark report.

Revenue driven by mobile emails also jumped 32% year-over-year and 80% over the past two years, according to the study.