The Emmy Effect: We're All Spectators At Somebody Else's Party 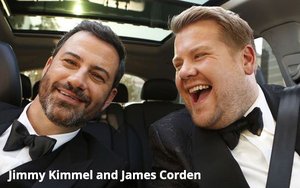 One thing I have never understood: Why do we care so much who wins an Emmy Award (or for that matter, an Oscar, Grammy or Tony too)?

Take last night’s Emmys, for example. All due respect and congratulations go to the folks at FX for the armload of Emmys “The People Vs. O.J. Simpson” collected at the awards. Enjoy your night, have a great time at the after-party, please don’t drive home drunk.

But what does it mean to the rest of us? Not much, particularly since the show aired last winter. (And it was a darned fine one too. I wrote two columns on it -- you can look it up.) Sarah Paulson had one of the standout performances of the year as Marcia Clark and even brought Clark with her to the Emmys.

Paulson won an Emmy and made an acceptance speech where she seemed to apologize for something. I think it had something to do with her having drawn a wrong impression about the Simpson case in general or Clark in particular back in the ’90s during the whole trial drama. Now that she has played Clark on TV, she thinks differently. Was that it? If so, that’s great for Sarah, but why should the rest of us care?

The Emmys, seen Sunday night for three hours on ABC, held few surprises where the major winners were concerned. Host Jimmy Kimmel even joked about it in the opening segment when he said “if your show doesn’t have a dragon or a white Bronco in it, go home now,” referring to “Game of Thrones” (the dragon) and “The People Vs. O.J. Simpson” (the Bronco). Both were big winners.

He even awarded a premature Emmy statuette to Jeffrey Tambor in anticipation of Tambor winning again for “Transparent,” which actually happened later in the show.

Sure, it’s nice when someone wins for the first time, such as Rami Malek, the star of “Mr. Robot” on USA Network. He seemed nice. Louie Anderson won too, for playing Zach Galifianakis’ mother on the FX comedy series called “Baskets.” Way to go, Louie.

It’s great that people are being recognized and awarded in their industry for their work. More power to them, but this annual televised celebration of their industry almost always comes across as gross showing off. I suppose the same can be said of all awards shows.

Everyone is so glamorous. Almost everyone is good-looking. They’re very rich too -- richer than you and me. They laugh, they smile, they join James Corden in a car to sing karaoke, as Kimmel did with Corden in the show’s opening bit, pictured above. They have so much fun, don’t they?

After they hobnob with their fellow luminaries (Look! There’s Chris Rock sitting behind Jerry Seinfeld!) and some of them win statuettes, then it’s off to parties such as the one called “The Governors Ball.” That sounds posh. I don’t even really know what a “ball” is. Although I’ve had a ball at various parties in my life, I doubt I have ever been to a real ball. What are the criteria for earning this designation, anyway?

You know who was really interesting? This guy Bruce Rosenblum, who came onstage to make a few remarks after being identified as the chairman of the Television Academy -- a role he is about to exit.

He had quite a weekend. On Saturday, he was pictured in the Wall Street Journal because he had just landed a dream job at Disney/ABC -- president of business operations for the company’s Television Group. He had formerly been a bigwig at Warner Bros. Television.

As for the show itself, as awards telecasts go, this one seemed pretty tightly put together. Kimmel was affable and funny, and most of the winners refrained from casting a pall over the festivities with acceptance speeches about social and political issues (although Donald Trump was brought up frequently).

Speaking of presidential candidates, the surprise appearance of Jeb Bush driving a limousine in a faux presidential motorcade (in which “President Selina Meyer” -- Julia Louis-Dreyfus of “Veep” -- was riding) in the show’s opening sequence was a great moment. He was hilarious.

One thing I noticed that I don’t quite understand: At various times during the show, thunderous applause was heard while a wide shot of the audience was shown. But here’s the thing: I could swear that the people seen in those wide shots were not clapping. So where was this thunderous applause coming from? Perhaps it came from that mysterious place, off-limits to the rest of us, where the magic of television comes from.