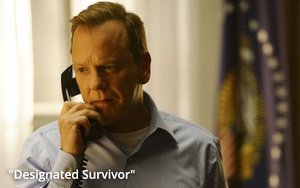 TV has a president fetish.

You can find long lists of TV presidents online -- most notably on Wikipedia. Just in recent memory, there was Geena Davis in “Commander In Chief,” Alfre Woodard in “State of Affairs,” Lynda Carter in “Supergirl,” Blair Underwood in “The Event,” Kevin Spacey in “House of Cards,” Tony Goldwyn in “Scandal,” all the presidents who came and went on “24” and of course, the most super-duper TV president of them all, Martin Sheen in “The West Wing.” There are dozens more.

TV loves its presidents so much that it has now elevated Kiefer Sutherland -- formerly the terrorist-fighting warrior in “24” -- to the highest office in the land, although his character serves reluctantly. You have no doubt seen the promos for this new Sutherland show, titled “Designated Survivor” and premiering Wednesday night on ABC. You haven’t seen them? That doesn’t seem possible.

This drama series, in which a cabinet secretary occupying a very low position in the United States government’s line of succession becomes president after a horrific incident, seems to be the centerpiece of ABC’s new fall season. At least, it seems so by the way the network is promoting it.

The network seems to have a lot riding on this reluctant president, but that’s nothing compared to the burdens he is suddenly saddled with when someone blows up the U.S. Capitol building during the president’s State of the Union address.

Everyone in attendance is killed at once -- the president, vice president, every cabinet member (except the one played by Sutherland, who is Secretary of Housing and Urban Development), Supreme Court justices, military joint chiefs, senators, U.S. representatives, various ambassadors, the First Lady and any other members of the president’s family who happened to be there and presumably, an array of everyday heroes seated in the audience who were waiting to be recognized in the president’s speech.

All gone -- except for mild-mannered HUD Secretary Tom Kirkman, who was the evening’s “designated survivor” -- the one person in the line of succession who was purposely situated elsewhere, just in case something happened to the rest of them.

This attack happens in the show’s first minutes, so the show, going forward, is about what happens afterward. It is a very farfetched scenario on so many levels, including the use of bombs placed all over the Capitol building -- something that one assumes would not be possible in the real world.

Then there’s the scope of the attack itself -- so much carnage and so many implications for so many people. It’s a pretty heinous, violent incident on which to base an entire TV series. Moreover, at least in Episode One, this horrible massacre is dealt with at arms' length, almost as if the show itself can’t cope with what it has created. Plus, in our current era, do we really need a TV show that depicts the leveling of the U.S. Capitol and the mass murder of every elected official in the government? The answer: Not especially.

However, the glue that keeps it all together is Sutherland, who emerges as TV’s king of farfetched scenarios when you think back on all of his derring-do on “24.” He makes these situations believable with his great skill for knowing how to strike just the right tone in every scene he’s in.

And since he’s in practically every scene of this show, “Designated Survivor” is supremely watchable -- so much so that I looked for an opportunity to watch Episode Two on ABC’s press site, but found it was not available. Alas. I wanted to know what happens next. And isn’t that what a TV series is supposed to do?