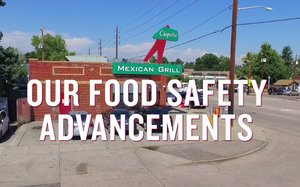 Having thus far failed to drive a sales revival with freebie offers and other efforts, Chipotle Mexican Grill has launched ads dedicated specifically to explaining the food safety measures that it has implemented since 2015’s multiple food contamination episodes.

Chipotle will be running digital ads that drive consumers to its site to learn about its extensive food-safety measures, The Wall Street Journal reported.

The site has an area that not only spells out the measures in words and diagrams, but features a video in which founder and co-CEO Steve Ells also explains the measures.

“We serve fresh food made from ingredients raised responsibly, without added antibiotics, hormones, colors, flavors or sweeteners typically found in processed food,” Ells says. “But in 2015, we failed to live up to our own food safety standards, and in so doing we let our customers down. At that time, I made a promise to all of our customers that we would elevate our food safety program. Here are the important advancements that we have made…”

The list includes work with suppliers and providing local farmers with training and funding in methods that avoid food safety risks; use of advanced technologies to eliminate pathogens without changing food quality or flavor; enhanced in-restaurant food preparation and handling procedures; food safety certification for restaurant and field leaders, and more, according to Ells and the site.

Chipotle’s first food contamination crisis began in August 2015, with two food-borne illness outbreaks caused by salmonella and norovirus contamination. Those were followed that fall by an E. coli outbreak, and then by separate norovirus incidents in December 2015 and March 2016.

Despite the chain’s free burritos promotions, Chipotle’s same-store sales were down 30% in this year’s first quarter. That quarter marked the first in which it showed a loss as a public company. In this year’s second quarter, same-store sales dropped 24% versus the same period in 2015. It returned to profitability, but profits missed expectations, and its stock price declined 38% in the previous 12 months.

Apparently, neither its first loyalty rewards program -- launched July 1 for a limited time (just three months, at least initially) -- or a new long animated video (“A Love Story”) that launched online and in movie theaters in early July have turned the tide.

David Acheson, the designer of Chipotle’s food-safety system told WSJ that a recently disclosed 9.9% investment by activist investor Pershing Square Capital Management has had no effect on the company’s marketing or safety efforts.

But the core issue is that the brand still has a long way to go to restore confidence, win back more customers and get new consumers to try the restaurant.

According to YouGov BrandIndex, Chipotle’s “buzz” score was around 11, and its “quality” score was between 21 and 23, in August 2015, prior to the food-borne illness crises.

Both have recovered somewhat, but not entirely. Currently, Chipotle’s buzz score is at -4, and its quality score is at 7.