'MacGyver'? Really? What's Next? The New Adventures Of ALF? 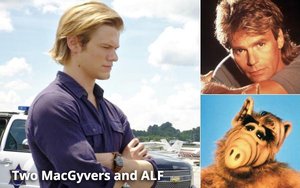 The original “MacGyver” was a heartthrob to Patty and Selma Bouvier, gravel-voiced twin-sisters of Marge Simpson on “The Simpsons.”

Their adoration of the tousle-haired hero of ’80s television (actually 1985-92) was a running joke for years, and it succeeded in turning “MacGyver” into a joke too -- not that the show needed their help.

And yet here comes CBS with a new “MacGyver,” perhaps banking on the nostalgia of Millennials who seem to take to remakes of the TV shows of their childhoods like flies take to honey. In a world where people will actually watch a “Full House” reboot -- Netflix’s “Fuller House” -- a “MacGyver” remake is not so farfetched an idea.

For the new “MacGyver,” which will kick off CBS’s new Friday night lineup at 8 p.m. starting this week, CBS has found a new tousle-haired actor, Lucas Till. He plays MacGyver 2.0 -- still named Angus MacGyver.

Like the original, the new MacGyver’s singular gift is his skill at assembling useful tools in the blink of an eye from seemingly unrelated materials he finds close at hand. He’s a genius surrounded by other geniuses -- something this show has in common with other CBS shows such as “Scorpion” and “Bull,” which premiered Tuesday. These people are never just geniuses, however. Instead, they’re the world’s greatest geniuses, possessing more genius than dozens of other geniuses combined.

Consider these descriptions of two colleagues the new MacGyver delivers in a bit of narration at the outset of Episode One of the new “MacGyver.” “Nikki Carpenter, MIT grad, passed up offers from Google, Space-X and Apple to save lives,” he says of Nikki, who also happens to be beautiful (played by Tracy Spiridakos). Imagine that? She turned down those super-cool companies to work for the government!

“The best senior analyst in the business,” he continues (although she seems like she’s all of 22 years old). “No one’s better on a keyboard,” he concludes, as the two are shown having sex on a keyboard.

MacGyver describes another female colleague as “the most successful clandestine field operative in U.S. history.” In all of U.S. history? Can’t anybody on a CBS show just be a little bit above average?

The storyline in the premiere episode has to do with a group of bad guys who intend to release a lethal biological agent in San Francisco with the potential to kill millions. Fortunately, MacGyver and his associates (who include rough-and-ready George Eads from the old “CSI”) find a genius computer hacker in jail who pinpoints the exact location of the conspiracy’s leader in about 15 seconds. Meanwhile, I can’t get a straight answer from Google for anything.

Not that these flaws will present an obstacle to many who will welcome the return of “MacGyver,” but Episode One suffers from execution and storytelling issues. These include one scene in which a bad guy is tortured with a nail gun and barely flinches when the nails are driven into his leg at point-blank range.

In another scene, MacGyver does TV’s patented “bullet dodge” when he dives behind a sofa in order to evade a hail of gunfire. Memo to TV writers everywhere: Humans are not fast enough to dodge bullets. Only Superman or the Flash can do this.

In another scene, MacGyver tries to overtake a truck with a low-flying helicopter but the men sitting in the truck’s front seat seem to have no idea there’s a noisy helicopter swooping in just above their heads.

Diversity-conscious readers please note: There is an African-American character in this show, but incredibly, he comes across like he’s MacGyver’s Man Friday. Talk about a throwback: This jive-talking black character -- played by Justin Hires -- is positioned as MacGyver’s roommate and “oldest friend.” But when we first meet him, he’s seen preparing a breakfast of waffles for MacGyver and telling MacGyver about some hare-brained scheme he has for winning a contest.

So while everyone else in this show is portrayed as the world’s greatest genius at something, this guy is making breakfast for our hero while wearing an outfit resembling a cook’s uniform. And later in the show, he’s seen trying to make a play for one of the lady agents like he’s Huggy Bear.

I tend to discount people’s complaints about racism in Hollywood, where to my eyes diversity is flourishing a lot more than many give the movie and TV industries credit for. However, even I was taken aback by this guy.

tv
3 comments about "'MacGyver'? Really? What's Next? The New Adventures Of ALF? ".
Check to receive email when comments are posted.
Read more comments >
Next story loading