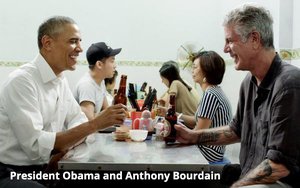 There he goes again -- turning up on TV in the kind of show you never saw a president appear in previously.

This time, it’s one of those food travelogue shows -- the one Anthony Bourdain does on CNN. In an effort to liven up the season premiere of his show, Bourdain invited President Obama to join him for dinner in a Hanoi noodle shop during the president’s three-day visit to the Vietnamese capital last May. This episode of “Anthony Bourdain Parts Unknown” airs Sunday night.

Bourdain must have thought all along that this would be a Hail Mary-pass of an invitation -- one with almost no chance of being accepted. But lo and behold, the president said yes.

So the two got together to chew the fat over bowls of bún cha and bottles of Vietnamese beer at a neighborhood joint in which the dozen or so other patrons didn’t seem the least bit fazed by the president of the United States sitting nearby in shirtsleeves drinking beer from a long-necked bottle.

Bourdain’s dinner with President Obama takes up eight minutes of this show’s approximately 43 minutes of running time. The segment begins 30 minutes into the show with the presidential motorcade pulling up to this tiny restaurant in the rain on a homely Hanoi street.

The president emerges smiling from his stretch limo in a white shirt with no jacket or tie. He looks affable, and not at all like the image being conjured by the piece of music this show’s producers have chosen to play over the scene of his arrival. It’s James Brown’s “The Boss,” with lyrics that include “Look at me, you know what you see, you see a bad mutha. Paid the cost to be the boss …”

After a brief chat outside, the president and the TV chef go inside to take their seats at a small table. Bourdain explains what they are about to eat, which is bún cha, composed of pork patties and grilled pork belly served in a broth of vinegar, sugar and nuoc mam, the fermented fish sauce that is a staple of Vietnamese cooking.

Hot chilies served on the side are optional. The president and Bourdain both take up the option and add them to their bowls, along with clumps of sticky Vietnamese vermicelli.

“This is killer,” the president says as he demonstrates his proficiency with chopsticks. He points out that he spent part of his childhood in Indonesia, so he’s no stranger to Asian food.

In the best part of the segment, Obama describes a meal he had when he was a boy at a restaurant near his family’s home in what seems like an obscure part of Indonesia. In Obama’s telling, part of a local river flowed right through the restaurant, and the restaurant operators would scoop live carp out of this waterway while you watched and then cook them whole just minutes after catching them.

You could imagine the gears turning in Bourdain’s head as he pondered the fastest way to get to this wondrous place before leaving Asia, although he didn’t respond to the president’s story with any follow-up questions asking for directions.

The president’s fish tale was the best part of their conversation because it was about food and memorable meals, which is what Bourdain’s show is principally about. However, Bourdain squandered at least part of this opportunity by steering the conversation awkwardly toward politics and international relations.

“We are actually talking about building a wall around our country,” Bourdain lamented to the president, who he then praised for his foreign policy initiatives. “Yet you have been reaching out to people who don’t necessarily agree with us -- Gaza, Iran, Cuba. I just wish that more Americans had passports. The extent to which you can learn how other people live seems useful at worst and incredibly pleasurable and interesting at best,” Bourdain said.

“It confirms the basic truth that people everywhere are pretty much the same,” replied the president. “The same hopes and dreams.”

The rest of this “Parts Unknown” hour is taken up with Bourdain’s wanderings through Hanoi, which seems like a vibrant city. He eats various foods (almost always a variant of noodles with meat or seafood in a bowl of broth), drinks beer with old friends, and contemplates the legacy of the Vietnam War.

Getting the president to participate in the show was a coup. But so was persuading a number of ordinary Vietnamese to take part also. Are they the same as us, as President Obama says? You watch, then you decide.