Forecast: By 2017, 75% Of All Programmatic Display Ads Will be Mobile 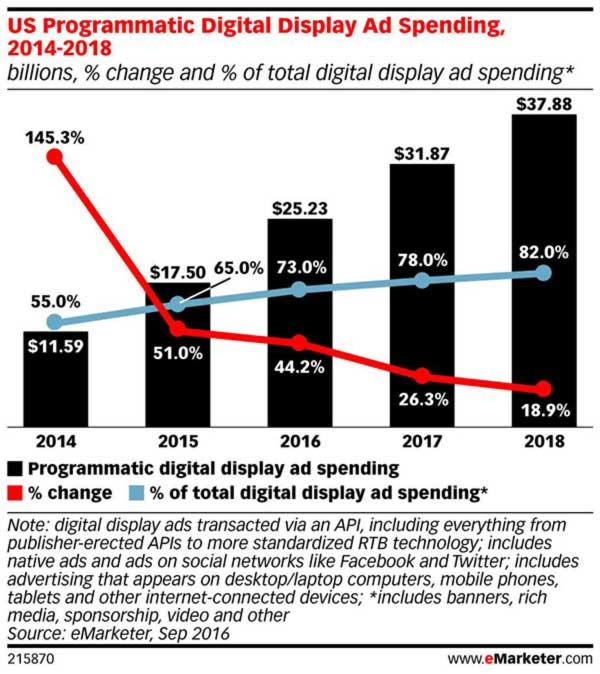 The forecast represents an update to eMarketer’s January 2016 forecast, according to Lauren Fisher, senior analyst. In the earlier forecast, she said eMarketer estimated programmatic would account for 67% of of total U.S. digital display ad spending in 2016. That figure was revised, in part, due to Facebook's earnings performance.

Spending on programmatic video is also on the rise. Notably, eMarketer projects that spending will more than double this year to $6.18 billion, amounting to 60.0% of all digital video ad spending. The research firm attributes the rise to improved targeting and measurement, along with some improvement in issues which continue to plague the advertising industry at large: ad fraud and viewability. As these concerns are addressed, more marketers are likely to dip their toes into programmatic video.

“The numbers show, pretty much across the board for display, regardless of device, display vs. video, etc., that programmatic is now a primary means of buying and selling ads. This shows that both buyers and sellers are now getting comfortable with it, and the market has matured,” Fisher told RTBlog via email. “Given that, I think the story in the next 12 to 24 months will be less about programmatic’s use in any one format or channel, and more about greater cross-device and cross-channel targeting and measurement capabilities. There's such a push from brands and agencies to transition to a more audience/customer-centric view of things vs. a channel or device agnostic one, and that's going to push for added advancements and improvements to cross-device and cross-channel targeting and measurement," she said.