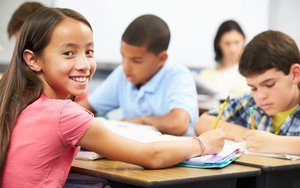 On the surface, Levi Strauss & Co.’s announcement that it’s bringing lessons on water conservation to some 1.5 million grade-school kids sounds like win-win-win cause marketing. Cash-strapped schools get help with environmental lessons. Levi’s gets to generate brand awareness with a key market segment. And kids get a greater awareness about an important global problem.

It’s a cause the San Francisco-based clothing company has invested heavily in, from its CEO’s public proclamations about how seldom he washes his jeans to its sponsorship of Project WET Foundation, which provides water-conservation education materials for teachers.

But experts worry that the practice is one more example of marketers taking advantage of kids when they are a captive classroom audience. While Levi’s insists there is no marketing intent behind the “Our Watery World” program, aimed at kids in grades 3 to 5, materials are indeed branded. They are marked “Generously sponsored by Levi Strauss & Co.” And the classroom poster includes cartoon characters clad in denim, with the telltale red tag on the rear pocket.

Child advocates don’t like it. “We feel that educating kids about water conservation is a laudable goal, but it shouldn't be done with branded materials,” says David Monahan, campaign manager at the Boston-based Campaign for a Commercial-Free Childhood, a nonprofit that seeks to protect kids from marketing it feels is exploitative. “Kids are vulnerable to marketing, and in school, they’re trapped. It’s not like they can change the channel.”

Levi’s says the program is “part of our company's goal to reduce water consumption through water education programs for LS&Co. employees, consumers and in the communities where we do business,” says Michael Kobori, VP, sustainability, at Levi Strauss & Co. He says the program grew out of a partnership with Project WET last year that instructed employees how to teach young people about reducing water use, with employees then going into local schools and volunteering. Then, on World Water Day, “we announced at the White House that we would train 100% of our corporate employees in the ProjectWET curriculum.”

Because of its previous commitment to raising awareness about the role of water in manufacturing and maintaining denim—a pair of 501 jeans uses 3,781 liters of water in its lifetime — the program makes good sense for Levi’s, says Whitney Dailey, director of marketing for Cone Communications, also based in Boston, which specializes in cause marketing. “Although some branded educational initiatives may seem contrived and even detrimental, for Levi’s, it’s a natural fit,” she tells Marketing Daily. “The company has spent years educating adults on understanding their water footprint, and this current effort helps instill that message at a more formative age.”

She points out that increasingly, brands are going to schools to tell their story. “It would have never occurred to me that 20% of kids struggle with access to clean clothing, but Whirlpool saw a unique issue its products could solve, and has seen great success with the program so far.” Colgate has also gone into schools, handing out toothpaste and brushes. Brands stepping in to help schools solve problems can be “interesting, but it’s a slippery slope if not done well.”

While soft-drink companies have drawn the most fire over the years for marketing to kids, McDonald’s also waded into the controversy with its McTeacher’s Nights, where teachers work behind the counter in a school fundraiser, with a teensy cut of sales going to the school. More than 3 million teachers protested, and one teacher’s union recently called it “predatory marketing of fast food to children.”