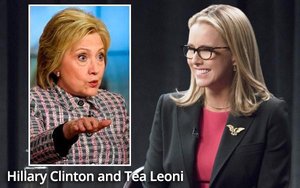 I guess we all know what Hillary Clinton will be doing Sunday night -- clearing her calendar of all campaign-related business so she can watch the season premiere of “Madam Secretary.”

She claims she’s a huge fan of the CBS series about a female secretary of state. Her most recent statements on the SOHTVF (the State of Her TV Fandom) were made a couple of days after she had a fainting spell in lower Manhattan on 9/11.

While appearing to stonewall the whole world about the state of her health, she nevertheless agreed to answer softball questions from some hard-charging members of the press corps about her TV-viewing habits.

Evidently a fan of CBS, Clinton, 68, declared her love for “The Good Wife” and expressed her sadness that the show had ended. She then said she was looking forward to the return of “Madam Secretary.” “I actually get a big kick out of it,” the former U.S. secretary of state said of “Madam Secretary,” which stars Tea Leoni as a fictional secretary of state named Elizabeth “Bess” McCord. The show starts its third season this Sunday (Oct. 2).

Last October, Clinton told Stephen Colbert on “The Late Show” that “Madam Secretary” is one of a handful of shows that she and her husband have binge-watched. I don’t believe it. I don’t think she and Bill have the spare time required to watch more than one episode of a one-hour show at a time. Nor do I think they watch much TV.

However, “binge-watching” is just the kind of faddish term that a politician would adopt and insist that she herself does, so she can seem to be in step with current trends.

Still, the world awaits word on what Hillary Clinton thinks of the start of Season Three of “Madam Secretary” -- that is, if she watches it this Sunday instead of stockpiling the season premiere and subsequent episodes on her DVR for a lazy Sunday afternoon of binge-watching with Bill some time after Election Day.

Ever since it premiered in 2014, “Madam Secretary” has been dogged by speculation that it is a valentine to Hillary Clinton. That’s probably not a fair statement because Bess McCord is not really like Hillary Clinton at all.

Instead, she’s a combination of fictional and real secretaries of state (three of whom have been female -- Madeleine Albright, Condoleeza Rice and Clinton). The show itself is influenced as much by the real Executive Branch as by all of the fictional ones that have been depicted in movies and TV shows.

“The West Wing” remains the gold standard of White House TV shows. By comparison, “Madam Secretary” is “West Wing” lite. In this weekend’s season premiere (which I got to watch in advance), plucky Bess wheels and deals in high heels -- advising the president (played by Keith Carradine) on campaign strategy, finalizing a deal to improve relations with a small Middle Eastern democracy, and even coming out as a believer in global warming.

In the show, the warming of the globe and subsequent rising sea levels are positioned as a threat to national security as various naval bases abroad get swamped with seawater. This was a new wrinkle for me (although I have to admit I rarely follow the “global warming” news).

If Hillary Clinton actually does watch this show, will she encounter a mirror image of herself? Not really, but it’s also true that the Keith Carradine administration is a democratic one, albeit a moderate one. And his democratic secretary of state is on the same page with him.

The central conflict (if there is one) is the question of whether Bess is fully committed to running with the president as his vice presidential pick. Now there’s a difference between Bess McCord and Hillary Clinton if there ever was one. “Vice president” is not a title Hillary Clinton has ever been interested in.