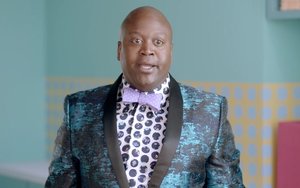 There’s nothing quite like the scent of fresh-cleaned laundry. But sometimes that scent fades too quickly. Procter & Gamble’s Downy “Unstopables” laundry additive has a solution for that.

In a new campaign featuring actor Tituss Burgess (best known for his role as Titus Andromedon on “Unbreakable Kimmy Schmidt”), the brand uses the actor’s distinct personality to show off the brand’s “Fresh that’s too feisty to quit” positioning. In one campaign video, Burgess interrupts a woman as she loads her laundry. Using the “Unstopables” additive, Burgess says, will keep the laundry smelling fresh for up to 12 weeks, “which feels almost as long as those online ads that don’t have a skip button.”

A longer video depicts Burgess likening the additives to a “theater actor, working his way to the top after years and years” before morphing into a Shakespeare-like monologue (“To stop, or unstop. That is the Downy.”) He also notes that people can use as much or as little of the product as they want: “It’s not a buffet. No one will judge you.”

“[Burgess] brings ‘a fresh that’s too feisty to quit’ spirit to life in a way that only he can,” Trevor Thrun, associate brand director – North America Fabric Care at Procter & Gamble, tells Marketing Daily. “We were one of the first scent boosters on the market, so we always like our campaigns to be a bit different and show that now, doing laundry can actually be a bit more fun.”

The effort is targeting what Thrun calls “extreme scent seekers,” for whom a fresh scent makes everyday tasks like laundry a little less mundane. “The campaign speaks to them by educating them on our distinct product offerings — like up to 12 weeks of scent from wash until wear — in a fun, lighthearted manner that we think they’ll respond positively to,” he says

The videos will run on digital and social channels such as YouTube and Facebook in early October, and will jump to television n the winter. Burgess will also be featured on in-store displays and marketing materials next spring.