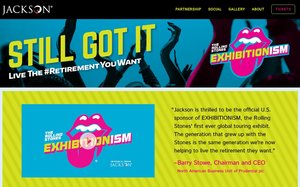 "Exhibitionism: The Rolling Stones" offers comprehensive insight into the band through an immersive and interactive tour highlighting its iconic artistic legacy.

“As a company focused on helping Baby Boomers plan for the next phase of their lives, our sponsorship of 'Exhibitionism' will help us more closely engage with the Boomers, who desperately need our help in re-taking control of their financial future,” Pardo tells Marketing Daily. “The sponsorship will allow us new opportunities to gain exposure and vocalize our message to this critical group.”

Jackson’s new marketing campaign, “Still Got It,” looks to leverage the unique connections between the company and Baby Boomers by honoring a generation that is revolutionizing retirement (rule breakers and change makers), just as they did with rock and roll.

“The Sixties were one of the most powerful eras of change and disruption in music, culture, and philosophy, and we believe Jackson is leading a similar cultural shift by overhauling the traditional view of retirement,” Pardo says. “Today's vision of life after work is often one centered on finding renewed purpose and living life to the fullest; this captures the spirit and vitality of the Baby Boomer generation.”

The company has spent a great deal of time crafting an outreach strategy for how to reach, engage and inspire the brand’s target audience, he says.

“All of our work will add up to the goal of changing the narrative around the financial services industry,” Pardo says. “We believe a relationship with 'Exhibitionism' marks the first step toward increasing our relevance, fortifying our story and taking our place at the forefront of a new retirement revolution.”

Jackson is collaborating with iEC, the advertising agency supporting the exhibit, to leverage myriad communication channels to promote its sponsorship of "Exhibitionism" on a national and regional level, paying special attention to the markets hosting the tour. Promotion includes a Jackson-branded microsite, www.RetirementYouWant.com, content marketing, social media, radio, outdoor, print and digital advertising.

"Exhibitionism" is the largest touring experience of its kind and the first time in history the band has unlocked their vast private archives. Previously housed at the Saatchi Gallery in London, "Exhibitionism" will make its North American debut in New York City in November.

It features the full participation of band members Mick Jagger, Keith Richards, Charlie Watts and Ronnie Wood. It includes more than 500 unseen artifacts from the band’s personal archives and will take visitors through the band’s 50-year history, embracing all aspects of art and design, film, video, fashion, performance and rare sound.