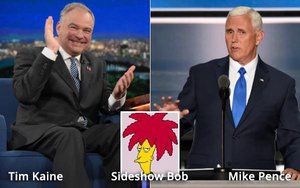 Vice-presidential hopefuls, come on down! You’re the next contestants on “The Price is Right”!

It’s beginning to seem more and more like one long game show, isn’t it? The march of candidates to the debate stage is now a weekly event with the second of this campaign season’s four debates heading to a TV screen (or mobile device) near you on Tuesday night (Oct. 4).

This is the quadrennial oddity known as the Vice Presidential Debate, the one night during the campaign when each running mate stands in for his presidential counterpart as their party’s standard bearer.

It’s a one-night-only opportunity for these second-string Sideshow Bobs to seize the media spotlight before they semi-disappear into the relative background of the presidential campaigns. They’ll go back to playing the B-list venues while the presidential hopefuls play the big rooms and book themselves onto “The Tonight Show.”

If memory serves, few of these vice presidential confrontations resonate for long. The only one most people seem to remember was the 1988 debate between Sens. Dan Quayle (Republican from Indiana) and Lloyd Bentsen (Democrat from Texas) in which Bentsen issued a withering reply to a reference Quayle made to John F. Kennedy.

This is a very well-remembered quote that played exceedingly well on television. Not that it mattered: Bentsen, running mate to Michael Dukakis, lost to Quayle and his presidential running mate, George H.W. Bush.

Clearly, memorable moments from the vice presidential debates have been few and far between. With that in mind, what’s the prognosis for Tuesday night’s televised bout between Republican Mike Pence and Democrat Tim Kaine?

For one thing, look for somewhat lower ratings for this clash than the one last week between Hillary Clinton and Donald Trump, although this week’s debate is already being treated with the same level of over-the-top exaggeration as last week’s event. By its very nature, it is not as important as the presidential debates, but the news channels are already talking about it as if it is.

One thing going for the vice presidential candidates is that they stand in stark, sane contrast to their running mates, who seem increasingly unhinged -- as if we have really reached that point in our history where no human being can be expected to endure the pressures and scrutiny that come with campaigning for president of the United States without having a nervous breakdown in public.

How else can you explain the behavior of both Clinton and Trump -- him lying awake at night issuing idiotic tweets, and she angrily telling one crowd in a speech that was played repeatedly on Fox News Channel that she can’t believe she’s not “50 points ahead” of this guy.

The vice presidential debates offer both campaigns an opportunity to showcase their more rational sides, as embodied by two guys who are under much less pressure than the higher-billed presidential candidates. The VP candidates will likely be asked about their own qualifications for the position they’re running for -- particularly its most important role as successor to the presidency in case the president dies or otherwise becomes unable to fulfill his or her responsibilities.

But this debate is also a chance for each of them to help sell his ticket -- and for that purpose, they will both be expected to shift the attention off of themselves in favor of playing up the best qualities of their running mates. Fireworks could happen, but they are not nearly as likely as they were last week.

Those of us watching at home will likely miss the pyrotechnics that exploded between Clinton and Trump because that’s why many of us watched. It’s the same reason some people watch a hockey game, in the hopes that a brawl breaks out, or a NASCAR race hoping for a smash-up. The veep debate holds little of this potential.

Who knows? Maybe we’ll actually learn something from Pence Vs. Kaine that will help us all make better, more informed decisions on Election Day. Wouldn’t that be something?

The vice presidential debate, scheduled for Tuesday (Oct. 4), starts at 9 p.m. Eastern and runs for 90 minutes on multiple networks.