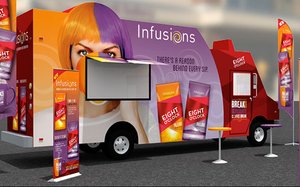 Eight O’Clock Coffee is supporting the launch of its Infusions line with an eight-week, $3-million campaign.

The marketing includes digital, social and radio advertising; a sampling tour and a direct mail sampling campaign; a national FSI; and in-store displays.

The positioning for Infusions coffees, which feature added functional ingredients, is: “There’s a reason behind every sip.”

The digital and mobile elements are targeting in-market shoppers across devices on top-indexing sites and apps, based on behavioral data segments and mobile app downloads.

In a “Try Today and Save” execution, desktop users are directed to a $1.50 coupon on Coupons.com, and mobile users are driven to the Ibotta app for a $1.50 reward with purchase.

On National Coffee Day, Sept. 29, those who made an order of any size on Eight O’Clock’s online store received a free sample of one of the Infusion blends.

A 10-city national sampling tour at local events and stores kicked off in Houston on National Coffee Day. During the events, consumers can snap selfies with filtered overlays showing why they should take a break to refuel with Alert or chill with Relax. The snaps can be sent to their mobile devices to share on social.
Radio campaigns promoting the new line and the sampling locations will run in all tour cities.

The social media campaign will include a new brand video featuring the “reason behind” messaging.

In a television “integration,” an executive from Eight O’Clock’s parent company, Tata Global Beverages, will be interviewed about Infusions and the sampling tour during “New York Live” on New York’s WNBC-TV. Segments from the integration will be used to create TV spots.