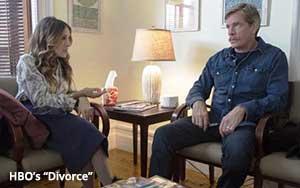 Oh no! The luckiest people on earth are unhappy. Boo hoo.

This is a reaction you might have to this new half-hour series called “Divorce” premiering Sunday on HBO.

You might also ask yourself: Is this half-hour show a comedy or a drama? HBO’s press material positions it as a comedy.

But as I have pointed out a number of times in previous columns about some of TV’s new comedy series, comedies on TV today are not necessarily funny anymore, which to me is a very odd concept. I suppose I am old-fashioned since I still subscribe to this conceptual equation: Comedy=opportunities for laughter.

Today’s comedies -- such as this new “Divorce,” for example -- seem to be designed, on purpose, as anti-comedies (a word I may or may not have just coined). This show’s subject is no laughing matter, and to give this show some credit, it treats the topic of divorce seriously.

Anyone who has had any experience with divorce will probably find this approach appropriate. But anyone tuning in to sample this show in search of laughs will not find any -- at least in the premiere episode.

I even read a subhead Thursday morning on a Variety story about this show that summarized it as a “wry look at marriage” -- a headline evidently composed by someone who hasn’t seen the show, or at the very least didn’t understand what he or she was watching.

Despite HBO’s apparent effort to persuade impressionable reporters and TV columnists that this show is “wry,” it is not wry. It is about a couple married for 10 years who have two children -- a daughter and a son -- who appear to be young teens. The family lives in a lovely house in the suburbs of New York City in what appears to be either Westchester or Rockland County.

They have it all, yet the wife, played by Sarah Jessica Parker, is unhappy. So for a year, she’s been having an affair with a single man played by Jemaine Clement, whose last series for HBO, “Flight of the Conchords,” was one of the premiere gems of TV history.

The wife informs her husband, played by Thomas Haden Church, that she doesn’t love him anymore and wants a divorce, but she doesn’t tell him it’s because of this affair she’s been having. HBO’s press material describes her divorce decision as an effort on her part to make “a clean break and a fresh start.” This is a cliché of movies and TV shows. It is also a fantasy.

The only way a person can expect to achieve a “clean break” and “fresh start” in the wake of a divorce would be to move across the country (or to another country), change his or her name, and then expunge all traces of that former identity so effectively that no family member, former friend or acquaintance would ever be able to make contact. Somehow, I doubt this is the kind of “clean break” the makers of “Divorce” have in mind for the character played by SJP.

The wife reveals her divorce plan following a dinner party at a friend’s house in which the lady of the house (played by Molly Shannon in this show’s best performance by far) drinks too much and then physically attacks her husband. There is nothing comedic about this scene either.

The problem with “Divorce” is that the wife’s dissatisfaction with her life is not enough to justify any of her behavior -- from the affair to this divorce request. Instead, many who watch this show -- particularly those who have been married for a long time -- will conclude that she’s little more than self-centered wimp giving up on her marriage after just 10 years with little or no regard to the havoc she’ll wreak on the lives of her children and husband.

What she needs is a Lucy Van Pelt figure to give her some succinct advice along the lines of: “Suck it up and count your blessings.” That’ll be five cents, please.