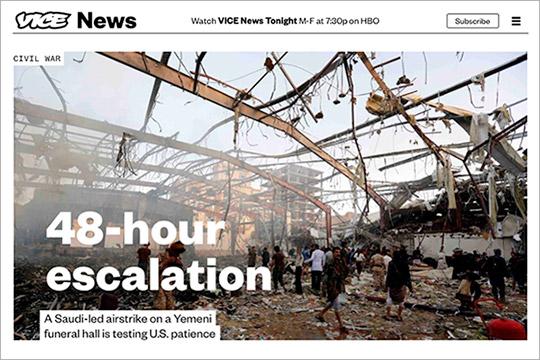 The Vice News Web site has relaunched to coincide with the debut of its business site and premiere of Vice News’ nightly news show.

The site was redesigned to match the style of the new “Vice News Tonight” series, which premieres tonight on HBO.

It will help “blur the line between the Web site and the television show,” Michael Deal, Vice News’ design and graphics director, told Politico.

News appears in a single column with videos, gifs, images and text stories that play and expand instream, similar to a Facebook or Twitter newsfeed.

Clicking on a video or article doesn’t take readers away from the feed, a feature that Vice Media hopes will encourage readers to continue scrolling to see other stories, stay on the Vice News site for longer and engage with more content.

“We are really trying to reimagine the home page,” Ryan McCarthy, Vice News’ editor-in-chief, told Politico. “We wanted to build a website that works really well with our two TV shows.”

The updated site has a minimalist, mobile-friendly look, with black and white bold graphics.

About 60% of traffic to ViceNews.com comes from mobile devices.

“Think of Vice Money as your translator for the language of business and economics,” Phillips wrote in a post introducing the site.

Vice Money is one of a half-dozen new verticals the company is launching this year. Vice Media hopes to attract new readers and revenue from category-specific advertisers. Vice Money launch sponsors include Geico and Ally Financial.