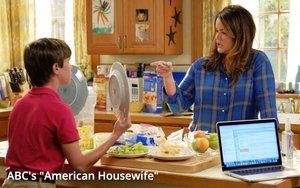 A new ABC sitcom premiering Tuesday night starts out appropriately for a show that should be flushed down the nearest toilet.

In the show’s first two minutes, you will learn much more than you’ll ever need to know about the bathroom habits of two out of five members of the fictional Connecticut family featured in this show titled “American Housewife.”

Tune in tonight and you will see the family’s young daughter squatting on their front lawn. “I’m getting great at peeing outside!” the child declares happily as her mother watches from a kitchen window.

About a minute later, you’ll meet Greg, the husband and father of this bathroom sitcom, pants around his ankles, perched contentedly on a commode. “My husband, Greg, at rest in his natural habitat,” says the show’s titular housewife and tiresome narrator, played by Katy Mixon. “Mommies of the world,” her narration continues, “I ask you: What would happen if we all took a leisurely half-hour dump every morning?”

I don’t know the answer to that question (having never had the occasion to ponder it until now), but I think I know what happened when a group of writers and producers got together to work on this show: They all took a dump and the result was this piece of crap.

That’s gross to read, isn’t it? Sorry about that, but that feeling of disgust you’re having right now closely approximates the experience you’ll have if you watch “American Housewife,” which is the worst new show of the fall season.

Make it stop, you might declare. But alas, it doesn’t stop. In Episode Two, we learn how this American housewife deals with a toilet paper shortage. This revelation comes during a conversation with one of her friends, a woman of means who employs a household staff whose responsibilities include replenishing the toilet paper supply.

“I don’t even know what running out of toilet paper feels like!” says her friend.

“It feels like a coffee filter!” announces our housewife heroine.

Remind me not to go to her house for coffee.

The central situation in this toilet-com has something to do with the Mixon character’s body type. She’s a “size 14-plus” in a well-to-do community where, as she puts it, “Everybody has big houses and tiny butts!” So the situation seems to be: She’s jealous because she and her family are have-nots in a community of haves.

And the community isn’t even fictional. It’s Westport, a real-life town that by all appearances, seems like a lovely place to live. But for no apparent reason, it comes in for a shellacking by the writers of this “American Housewife” show.

“It’s the kind of town … where every idiot has a boat and a labradoodle!” says this jealous, plus-sized housewife in this sitcom’s near-constant narration, which would have been enough to render this show unwatchable all on its own if it weren’t for all of its other loathsome qualities.

Somehow, the entire community of Westport gets unfairly painted as racist and homophobic by this show’s angry housewife in a display of intolerance that is breathtaking even by Hollywood standards.

Meanwhile, there’s no evidence that these Westporters on the show are prejudiced or bigoted at all, except for one character who comes from out of town to tour a house for sale across the street. And she is quickly disposed of.

And yet, the angry housewife makes all sorts of accusations about her neighbors based on what they look like and the houses they live in. It’s the usual paradigm so common on shows like this: You’re supposed to simply assume these are all bad people because … Why? They’re happy?

One group that won’t likely be happy is the one made up of those who might tune in to sample “American Housewife” Tuesday night and then come away afterward wishing they could get that wasted 30 minutes of their lives back.

To forestall this outcome, the TV Blog suggests watching “The Middle” at 8 Eastern and “Fresh Off the Boat” at 9 -- using the “American Housewife” time slot (8:30-9) for a bathroom break.