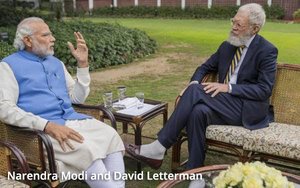 Mujibur and Sirajul are nowhere to be seen when David Letterman travels to India on the season premiere of NatGeo’s “Years of Living Dangerously” later this month.

The two former bit players on Letterman’s CBS “Late Show” -- who gained fame by virtue of their proximity to the Ed Sullivan Theater as employees of a New York souvenir shop -- happened to be from Bangladesh. But Letterman’s relationship with them was the only hint that he had any interest in the people and culture of south Asia -- until now.

Apparently, Letterman is passionate about India. As you will learn if you watch this episode of “Years of Living Dangerously” Oct. 30, Letterman is very concerned about the challenges facing India as the country’s population explodes and the government ponders ways to bring electric power to an estimated 300 million Indians who have no access to electricity. That’s funny, he never mentioned it before …

Nevertheless, the show has Letterman venturing to New Delhi, the Indian capital, where he tours some of the city’s crowded byways in a pedicab, visits a tailor to be measured for a custom-made kurta -- the long cotton shirt that is a staple of Indian men's apparel -- and meets with various stakeholders in India's future. Among these are energy entrepreneurs, an Indian energy minister and by the show's end, the prime minister himself, Narendra Modi. Letterman, 69, made this trip last March. The TV Blog got an opportunity to preview the show this week.

Clearly, this excellent adventure was no stupid human trick. In this show, Letterman is no longer the comedian we remember from his late-night shows. Instead, he is now an intrepid, bearded celebrity reporter who has come to India on a mission to explore the country’s consumption of fossil fuels -- most notably, coal -- and the effect of India’s energy usage on climate change.

“I have always been fascinated by India,” Letterman says in a voiceover near the beginning of the show. “But what I hear more and more of these days is how it will soon be the most populous nation on earth. For me, the question is: What’s that going to mean for climate change?”

Some of Dave’s “reporting” consists of doing Google searches in his hotel room -- from which he learns that India ranks third in the world in coal consumption, following China and the United States. But to give him his due, he does get out in the hinterlands, at one point visiting an Indian family living in meager surroundings in a village in Uttar Pradesh. There, Dave meets schoolchildren who do their homework by the light of a single flame fueled by kerosene.

In this one-hour second-season premiere of “Years of Living Dangerously” -- subtitled “A Race Against Time” -- Letterman’s story is interwoven with a separate story featuring another celebrity headliner, Cecily Strong of “Saturday Night Live.”

In her story, she takes on the role of investigative reporter as she travels to Nevada and Florida to shed light on the efforts undertaken by big energy utilities in those sunny states to crush well-meaning entrepreneurs who want to bring solar power to individual homes.

Wide-eyed Cecily, 32, seems shocked to find out that the big power companies employ lobbyists in state capitals to influence legislators into regulating the solar companies out of business because they compete with the power companies.

This situation has been reported elsewhere, but her findings are mildly illuminating nonetheless. If you watch her portions of the show, you might form the impression that the power companies in Nevada and Florida are on the wrong side of history because, as Cecily also reports, a number of other states have managed to create attractive environments for alternative-energy entrepreneurs, despite the objections of established utilities.

But Cecily doesn’t get to sit down with any heads of state. Letterman enjoys that privilege, however, when he has a summit meeting with the Indian prime minister (seen in the photo above) and the prime minister agrees with Dave that the future of the planet and the natural resources of India are vitally important.

As the show ends, you will get a glimpse of Letterman on his Montana ranch, where he too has installed an array of solar panels in a nearby field. His custom-built log house is a wonder to behold high on the Montana plains. So is the sight of Letterman in leather chaps and cowboy boots astride a galloping horse in the show’s closing scene. He is certainly not riding into the sunset, but undoubtedly toward some new adventure.