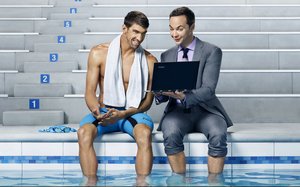 Michael Phelps may be the fastest man in the pool, but when using a computer? Not so much.

Intel has enlisted Phelps for a new series of advertisements showing off their processors’ speed in the Olympian’s first post-Games campaign (of a brand that wasn’t already one of his sponsors, anyway). The effort was inspired by video from the Olympics showing the athlete watching race footage on an old computer (with a little “Phelps Face” thrown in for good measure).

In one commercial (from agency McGarry Bowen), Phelps is watching race footage on an old laptop, encouraging himself to go “faster." Once it's revealed he’s speaking to the video, which keeps pausing and pixelating, playing on his device, Intel’s brand spokesperson, actor Jim Parsons uses the “world’s fastest swimmer line” on Phelps, suggesting he should “retire that PC,” because newer PCs are better at running 4K video.

“We’re talking to people who have been holding onto their computers a little too long,” Herd says. “We’ve all heard about how devices have improved, but we don’t act on it.”

Another spot uses the athlete’s now infamous “Phelps Face” meme, blaming Phelps’ determined glower on a slow-processing laptop. Herd says she was concerned that the idea might have played itself out in the weeks since the Olympics, but Phelps’ recent appearance on the Tonight Show making fun of the meme, eased her apprehensions. “We just decided to take it and make it part of the campaign,” she says.

The campaign is scheduled to begin airing on broadcast and cable networks beginning Oct. 17. It will also include online and social components as well.