Dads Are The Stars Of Baby Magic Campaign 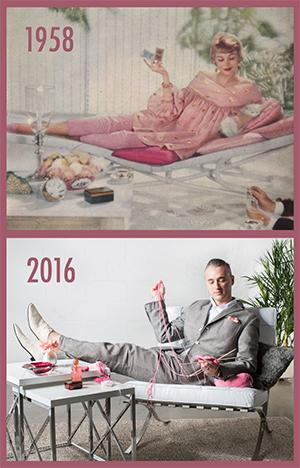 Parenting roles have changed over the past 65 years, and so has the advertising reflecting them. Baby Magic, which is commemorating its 65th year of business this year, is resurrecting one of its first advertising campaigns, showcasing dads where it once depicted moms.

“Millennial parents are embracing teamwork and striving to share caregiving responsibilities more than ever, so we wanted to spotlight outstanding dads everywhere who are changing the way society looks at fatherhood,” Laurie Enright, director of marketing at Baby Magic parent Naterra International, tells Marketing Daily.

“While quality ingredients and safe products have always been and will always be at the top of our priority list, we also wanted to demonstrate in a creative way how our brand appreciates and understands the importance of knowing our customers’ needs and situations.”

The effort apes the brand’s advertising from the 1950s, which featured expectant mothers in chic maternity wear and the headline “For Every Lady In Waiting.” The new effort puts new dads side by side with those original images, in similar poses and preparing for a baby’s arrival (such as knitting booties or painting a nursery), along with the line “Dads in the Making.”

“At the time of the original 1958 campaign, showing pregnant mothers in advertising just wasn’t done, so Baby Magic decided to put a bold twist on their advertising by showcasing the beauty and elegance of expectant mothers,” Enright says. “With this campaign, we wanted to pay tribute to our rich brand heritage while also giving dads the love and recognition that is oftentimes missing from baby care advertising.”

Information about the dads (a musician, woodworker, mixologist and Baby Magic’s Asia-Pacific head of development) is featured on Baby Magic’s Web site. “We chose subjects for the campaign by searching our home town of Dallas, Texas for expectant, interesting (not to mention handsome and cool) fathers,” Enright says. “As we all know, fatherhood isn’t one size fits all. An emphasis on diversity and an all-inclusive feel was important for us in representing the Baby Magic brand.”

The campaign is currently running in digital and social channels, and in mass-market publications and Drug Store News. The company is also exploring some retail activations with retailers, Enright says.